Tyra Banks: From Model to Mental 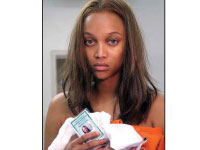 Tyra Banks has won the world over with her limitless ambition and her inability to do anything constructive with it.
This is the woman who once recorded a single with Kobe Bryant. This is the woman who appeared in “Halloween Resurrection.” This is the woman who recorded the song “Shake Ya Body,” that was originally going to appear on an album entitled “T.Y.R.A.”
Even when Banks is succeeding, it’s hard to take her seriously. While “America’s Next Top Model” is one of the most popular shows on TV, it’s hard to hear her voice and not think this is a woman who once spent more than 100 minutes acting like a doll-come-to-life through Lindsay Lohan’s black magic.
Which is what makes “The Tyra Banks Show” so ridiculously puzzling.
“The Tyra Banks Show” is admittedly targeted at a young female audience.  The catchphrase speaks volumes both to the show’s content and to Banks’ massive ego with the claim “every woman has a story … and it happened to Tyra too.” The show’s intent is to make an internationally recognized model and Emmy winner into the sassy fashion-conscious friend you only wish you had.
And some of the time, it kinda works. The subject is often light and flowery, but too often Banks heads into territory where she loses all credibility.
Like most talk show hosts, Banks occasionally books “the freaks,” people who for whatever reason, have a personality quirk or desire that is just abnormal enough to air on national television at 2 p.m. Unlike most talk show hosts, Banks then decides to act like a doting mother, voicing her opinion and not letting guest statements speak for themselves.
Whether it’s a girl who is deathly afraid of garden gnomes, a 15-year old who has been taking fertility drugs in a desire to be impregnated by her 17-yearold boyfriend or a coalition of mothers who all enjoy smoking marijuana around their children, Banks is sure to offer some pandering advice or opinions on the topic.
It isn’t like this is something new. Most talk show hosts accept that they are just helping celebrities plug their most recent projects or giving children some “aw-shucks” moment, but the way Banks does it is particularly offensive in the way that it turns even a 40-year old woman into a child.
In December, Banks announced this would be the final season of her award-winning show. Even with all my hate, I would be lying if I said I was happy it would be gone. The episode about the girls who eat scabs and toilet paper is pretty much the finest hour of television ever.
More from VoiceMore posts in Voice »