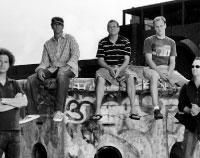 It’s finally here.
“Mantis,” the latest album from improv-rock gods Umphrey’s McGee, has successfully set the progressive rock bar at its highest for 2009. Arguably Umphrey’s’ best studio effort to date, “Mantis” is absolutely flawless.
The caliber of talent within this band is unbelievable. Over the past 10 years, Umphrey’s has produced numerous studio and live albums, all steadily significant in the band’s growth and immeasurable success. The band’s live shows are some of the most amazing works of art I’ve ever witnessed. Prog-rock improvisation is not an easy task, but these guys manage to make it look and sound effortless.

“Mantis,” inspired by the Greek word for prophet, is the band’s first album to be composed of entirely new material not yet performed on the road. However, the band has begun playing “Mantis” material live since the album was released on January 20. The creativity doesn’t just stop at the album. You can bet it elaborates on the new compositions during its live shows, sculpting them to perfection, affixing inspired solos and long, profound jams.
The album is indescribable as far as each individual song goes. There’s so much to be said about the unending layers of harmony, melody and just plain musical intellect. The album is a little more structured than Umphrey’s’ past efforts, but still holds that beautiful tiered perfection that the band wears so well.
One standout is Joel Cummins’s exceptional capacity for the keyboard. Some of the things he comes up with just blow my mind. He shows off especially in “Made To Measure,” a polished blend of syncopated piano, strings and gorgeous vocals donated by both Cummins and front man Brendan Bayliss.
As for the title track, the only word assumed is epic. “Mantis” is 12 minutes of pure neo-prog goodness. Tracing back to the likes of Yes and Rush to name a few, “Mantis” is inspiring in every sense of the word. Toss in guitarist Jake Cinninger’s voice for those unbelievable three-part harmonies, and you have merely skimmed the surface of what this piece accomplishes.
Additional harmonies are showcased in the Phish-esque “Prophecy Now” and “Spires,” an impressive two-parter ending in a beautiful mesh of tremolo violin, electric guitar and entrancing vocals.
Possibly the best representation of pure Umphrey’s magic can be found in “Cemetary Walk” and “Cemetary Walk II.” This combination of songs adds up to one of Umphrey’s’ best endeavors to date. Cummins continues to impress on the keys, and even more impressive is the driven groove by Ryan Stasik on bass. This work is a perfect example of the magnetic, balanced mix of sound created by Umphrey’s on a regular basis.
“Mantis” is a must-have for those who are prog-rock or jam fans, or just those who appreciate good, solid music. Umphrey’s is obviously still going strong and you are guaranteed to be impressed with this album.
This is one of the best bands out there right now. Go pick up this album, subscribe to a podcast, or see them live at least once.
Now is actually the best time of all to be a fan. “Mantis” is sure to become something stunning at the band’s upcoming live shows and beyond. Umphrey’s McGee is undoubtedly one of the most original, melodic bands that has ever graced the progressive rock scene. They are all extremely accomplished musicians with intensive musical backgrounds and the most creative minds you could ever imagine.
More from VoiceMore posts in Voice »