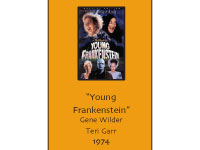 When I was younger, my parents tried to force culture on me, as many do, through various mediums – fancier foods, smarter television and more productive activities.
Every once in awhile, they would sit me down on the couch and torture me with older films they adored when they were younger and wanted to share with me. Most movies bored me, others confused me and many I immediately disregarded since they were in black and white.
However,one film struck a chord with me, even with its lack of color. Though I would never admit it at the time, it is one that I loved watching, and still do – “Young Frankenstein.”
Released in 1974 but shot entirely in black and white, “Young Frankenstein” is loosely based on and parodies Mary Shelley’s novel “Frankenstein.”
“Young Frankenstein” centers on Dr. Frederick Frankenstein, played brilliantly by Gene Wilder, the grandson of the mad scientist characterized in the book. After inheriting his family’s estate in Transylvania, Frankenstein reads his
grandfather’s
journals and becomes inspired to try his own hand at re-animating the dead.
When in Transylvania, Frankenstein works with the naively beautiful Inga (Teri Garr), the hunchbacked Igor (Marty Feldman) and the angry, aggressive
Frau Blucher (Cloris Leachman), a woman so fierce, horses whinny at just the mention of her name.
Once brought to life, Peter Boyle as The Monster brings out the entertaining side of science, shining without properly speaking. The Monster is not relegated to just a sidekick. Rather, he is given a real role, even part of a love square, between himself, Frankenstein, Inga, and Frankenstein’s haughty girlfriend Elizabeth (Madeline Kahn).
Each member of the cast meshes melodiously, with impeccable comedic timing, something that many actors of today would kill to have. The flow is seamless, and the delivery is classic, easily making a film for the ages.
The script, written by Mel Brooks and Wilder, is risque and classic all at the same time. Many of the gags come from basic wordplay. For instance, Frankenstein and Igor debate about the pronunciation of certain words, like their own names, and simple misunderstandings transform into timeless banter.
Many of the jokes are not as innocent, but the film, though laced heavily with sexual innuendo, has a seemingly much cleaner presentation than “The Hangovers” or “Superbads” of today.  Even after 35 years, the humor still conveys a freshness unprecedented in the comedies of now.
Serving as the film’s director, Brooks captures the essence of the Frankenstein films it lampoons, using many old-time techniques besides shooting in black and white. The beginning minutes are solely credits, the soundtrack is purely orchestral (with the exception of one riotous musical number) and the transitions between scenes often fade in and out more dramatically than usual.
My parents are not the only ones who adored this film, either, and since they also TiVo reality shows on VH1, they cannot entirely be trusted. “Young Frankenstein” is on countless lists, like the American Film Institute and “Total Film” Magazine top comedies lists, not to mention the recognition it received by both the National Film Preservation Board and the Library of Congress National Film Registry.
Next time you are looking for a few laughs and want to branch out from a Judd Apatow flick, impress your friends with “Young Frankenstein.” Your parents will certainly be proud.
More from VoiceMore posts in Voice »