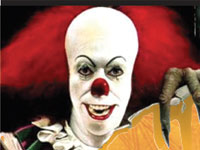 There’s nothing like sitting in the dark watching your favorite scary movie and waiting in suspense as the villain approaches. From psychological thrillers to slasher flicks, movie villains have evolved, reaching into our deepest fears and attempting to scare the crap out of us, the very fans who love them.
In the spirit of the Halloween season, grab your stash of Halloween candy and pop in your favorite thriller – here is Voice’s countdown of the 10 best movie villains of all time.
10. Samara Morgan- “The Ring”
Daveigh Chase, 2002
Weapon of choice: VHS tape
Favorite phrase: “Seven days.”
What you learn: Avoid unmarked videotapes, nosebleeds and the common housefly.
Scariest moment: The flashback of the decrepit girl in the closet.
9. Freddy Krueger- ”A Nightmare on Elm Street”
Robert Englund, 1984
Full name: Frederick Charles Krueger
Weapon of choice: clawed glove
Favorite phrase: “Whatever you do, don’t fall asleep.”
Directed by: Wes Craven
“A Nightmare on Elm Street” is a perfect example of making an everyday activity, such as sleeping, simply horrendous. The undead Krueger can slip in and out of dreams and slaughter as he pleases. Still not sure why Johnny Depp had to be sacrificed though.
8. Johnny Lawrence- “The Karate Kid”
William Zabka, 1983
Weapon of choice: The leg sweep
Favorite phrase: “You’re alright, LaRusso!”
I know what you’re thinking. “The Karate Kid” is not a horror flick. However, there is nothing more frightening than facing the best student in the Cobra Kai dojo, who also happens to be your current girlfriend’s fuming ex.
7. Michael Myers- “Halloween”
Nick Castle, 1978
Weapon of choice: kitchen knife
Favorite phrase: “……….”
What you learn: How frustrating it is to watch people run from a slow-walking serial killer, because all they do is scream and fall down.
6. The Devil / Regan MacNeil- “The Exorcist”
Linda Blair, 1973
Weapon of choice: demonic possession
Favorite phrase: “My bed was shaking. I can’t get to sleep.”
Directed by: William Friedkin
5. Norman Bates- “Psycho”
Anthony Perkins, 1960
Weapon of choice: kitchen knife
Favorite phrase: “A boy’s best friend is his mother.”
A.K.A.: “Norma” and “Normal” Bates
Directed by: Alfred Hitchcock
There couldn’t have been a more fitting title. Due to intense jealousy, mama’s boy Norman Bates murders his mother after she begins seeing a man. He then preserves the body and assumes his mother’s likeness as “Norma,” stabbing victims to death while wearing her clothing.
4. Carrie White- “Carrie”
Sissy Spacek, 1976
Weapon of choice: telekinetic powers
Favorite phrase: “If I concentrate hard enough, I can move things.”
What you learn: If your mother is anything like Margaret White, it’s time to move out.
3. Pennywise the Clown- “It”
Tim Curry, 1990
Weapon of choice: unquenched hunger for kid flesh.
Favorite phrase: “You all taste so much better when you’re afraid.”
The reason for putting Pennywise at number three was the same reason I can’t willingly play Bozo Buckets anymore. What a horrifying creature. When his teeth change from white, smiling clown teeth to jagged yellow fangs, you know it’s pretty much over.
2. Hannibal Lecter, M.D.- “Silence of the Lambs,” ”Hannibal,” “Red Dragon” and “Hannibal Rising”
Anthony Hopkins, 1991-2007
Weapon of choice: cannibalism
Favorite phrase: “I do wish we could chat longer, but … I’m having an old friend for dinner. Bye.”
Scariest moment: In “Hannibal” when Lector cuts out a section of the guy’s brain, fries it and feeds it to him. Grossssssss.
1. Jack Torrance- “The Shining”
Jack Nicholson, 1980
Weapon of choice: Roque mallet/axe
Favorite phrase: “Here’s Johnny!”
Directed by: Stanley Kubrick
What you learn: Avoid room 237.
Scariest moment (besides the ending): When the former owner, Grady, tells Jack he could be management material if he could just control his son and wife. That scene always sends rolling chills down my spine.
One of the main reasons this movie is so scary is that Torrance’s character seems such like a real husband and father. Stephen King has even said Torrance’s character was written as partially autobiographical, stating he too was struggling with alcoholism and unprovoked rage towards his own family at the time.
HONORABLE MENTIONS
Deadites- “The Evil Dead” (1979-1992) Leatherface- “The Texas Chainsaw Massacre” (1974) Jason Voorhees- “Friday the 13th” (1980) Fate- “Final Destination” series (2000- 2009) Damien Thorn- “The Omen” series (1976-1981)
More from VoiceMore posts in Voice »