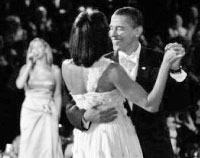 Music can certainly set a mood. From a horror scene in a film to motivation during a long run, music can easily change the atmosphere and declare a tone for events to come.
In the case of Barack Obama’s inaugural celebrations, his campaign philosophy of change was certainly present within the music.
Gone were the outdated performances of the past, ushering in a new era of promise. With some of the biggest names in music to serenade the attendees, the night seemed more comparable to a festival concert than a political event.
Whether on the Neighborhood Inaugural Ball that aired on ABC or MTV’s “Be the Change” ball, all of the performers strived to inspire those sharing in the experience, just as the man they were celebrating had done for them.
For Barack and Michelle, the only way to start off the presidency right was through a performance by one of the biggest stars, Beyonce.
Singing to Etta James’s perennial classic, “At Last,” Beyonce wowed the crowd with her strong voice and graceful presence. As she neared the finish of the song, her eyes were filled with tears of joy, along with many of the audience members, solidifying a historic performance.
Other big names that electrified the stage were Mariah Carey, Alicia Keys and Shakira. Even contemporary acts like Kanye West excited the youth of the nation on MTV.
Carey, who perpetuated her diva persona with a bejeweled microphone, delivered a strong message with her rendition of her 1993 hit, “Hero.” She did not project the same strength in her vocals as before, a tiny detail the visibly inspired audience seemed to disregard.
Keys, who struck a powerful chord with her performance of “No One,” dedicated her song to the dreamers of the world, saying, “When you have big dreams, there’s really nothing that can get in your way.”
The Neighborhood Ball became a worldwide affair, through the performance of Columbian singer Shakira, with her presentation of “Bright Side of the Road.” She traded in her trademark belly dancing and cropped shirts for a classy gown and little movement.
Even the staunchest Obama dissenters could feel the passion behind the performance consisting of an odd, yet powerful group singing to Stevie Wonder’s “Signed, Sealed, Delivered.”
The aforementioned performers were joined by Adam Levine of Maroon 5, Sting, Jay-Z, will.I.am. of the Black Eyed Peas, Faith Hill and Mary J. Blige. The uplifting tone of the song left its viewers with a promising taste in their mouths.
Over on MTV, with many of the performances geared toward the influential youth, Obama seemed to be making a statement that he would not forget those who got him to the White House.
Void from MTV, however, was the red-carpet worthy attire in which the performers dazzled. Kanye West sported a mullet and Fall Out Boy’s members wore skinny jeans and baseball hats, with the drummer even shirtless.
Their informal outfits did not take away from their messages. While many of these performers have openly expressed their distaste for former President George W. Bush’s actions in the past, the night proved to be one of unity and looking forward.
Even Kanye West, who’s infamous words of anger in the wake of Hurricane Katrina, and Mike Myers’s subsequent face, created a pop culture reference for the ages, had kind words to say towards Bush.
“At the end of the day, Bush was a human being, and a lot of things got overshadowed,” West humbly admitted.
If Obama can humble even the greatest of divas, then maybe there is hope for the future.
More from VoiceMore posts in Voice »