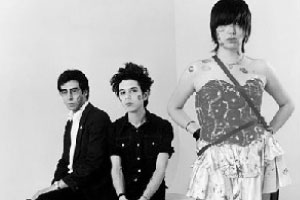 There are few things worse then a long-awaited album being a dud.
Coming from the normally fantastic Yeah Yeah Yeahs, “It’s Blitz!” is a travesty.
The Yeah Yeah Yeahs exploded onto the scene in 2005 with “Fever to Tell,” an uncut and savagely refreshing rock record full of hooks, witty lyrics and the unchained style of Karen O’s singing. The song “Maps” charted onto the Billboard Hot 100 and appeared on the videogame “Rock Band.”
The band followed its rock record with “Show Your Bones,” a heartfelt, more alternative sounding album that nearly escapes genre classification. Once again, Karen O was able to add her desperate howl to the music, but it was considerably more controlled, and at times, the band sounded like it was holding back.
It might be best to describe the band’s newest record as a case of two steps forward and one step back.
The Yeah Yeah Yeahs, for the most part, have replaced guitars with synthesizers and keyboards, giving the sound a considerably more electronic feel. This is used to great effect on early songs such as “Zero” and “Heads Will Roll.”
The decision to go electronic does show the band is still experimenting with its sound, but lyrically, the Yeah Yeah Yeahs are stuck in the same place as they were with “Show Your Bones.”
After about four songs of synthesized dance rock experimentation, the album almost completely diverges into low-key moody and introspective explorations.
The last two-thirds of the record is just as good as anything that appeared on “Show Your Bones,” with tracks such as “Dragon Queen” and “Hysteric” being the best among them. But after already having listened to these kinds of songs for an album, one cannot help but think the group may be falling into a sort of rut.
It does not help that these last songs are plagued with some of the same problems that harmed “Show Your Bones.”

Once again, Karen O sounds like she is holding back, never showing off the same ferocity that was apparent on songs such as “Y Control” from “Fever to Tell.”
At other times, it feels like Nick Zinner is having his formidable guitar playing pushed to the side in order to further the new electronic sound.
Perhaps the decision to tone it down was a conscious one.
Karen O’s choice to embrace a controlled delivery perfectly suits the tighter dance oriented music on “Heads Will Roll” and continually repeating “Off with their heads” creates as memorable of a refrain as anything else in recent dance music.
The biggest problem the Yeah Yeah Yeahs had with the record is passing through the bleak moodiness of the last two-thirds of the record. It offers nothing listeners haven’t heard before and is fairly forgettable.
However, the high points are riveting fusions of dance and rock that are sure to draw adoring Blondie comparisons.
“It’s Blitz!” is definitely the sound of a band still experimenting with where it truly belongs, and it pays off when they abandon everything they have already done for new and uncharted territory. When they stick with what they know, it is a sputtering trial of patience.
More from VoiceMore posts in Voice »