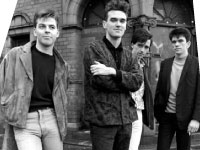 Your favorite vocalist has a shrine to The Smiths’ Morrissey in his bedroom closet at his mom and dad’s. And that influential vocalist’s original band just released a greatest hits collection for your listening pleasure.
Finally, inspiration of the Pete Wentz variety in the comfort of your own home.
But seriously, listen to The Smiths.
The sensitive, troubled art department kid you knew in high school listened to The Smiths. Everyday.
And let’s be honest, there’s a reason black screen-printed T-shirts of The Smiths litter the racks of every trendy clothing store you’ve ever been in. They’re the only pop band ever to sell well in Seattle.
All guitarists or vocalists you’ve heard on the radio over the last 20 years can tell you about how The Smiths impacted them.
There is clear proof The Smiths were and still remain a force and standard in the pop music industry. Exhibit A: “The Sound of The Smiths: The Very Best Of … ”
This greatest hits collection does a pretty good job of presenting The Smiths in its best light, which is a harsh hospital fluorescent. It’s a pop album. It’s an indie rock album. It’s tangible proof that New Wave was more than just fluff.
Contained in this collection is the sound of pounding, driving rock ‘n’ roll fusion (but don’t think The Police or The Clash) and enough dark emotional brooding to let Joy Division’s perpetually morose Ian Curtis rest in peace.
All this amidst a sea of shameless ’80s Britpop chock full of sing-a-long choruses and falsetto, but completely void of the sci-fi synths of other popular ’80s groups.
The album spans The Smiths’ entire career, including almost all of the band’s popular singles. It will get an “I’ve heard this before!” from nearly anyone on at least one track.
The music varies from song to song, and while the collection is called “The Sound of the Smiths,” it comes off as “Who Are The Smiths, Exactly?”
All four members contributed to the group’s sound, but the distinctive staples of the band’s sound were the guitar work of Johnny Marr and the voice of the man known simply as Morrissey. Without those two, The Smiths would have been a different band.
Marr’s guitar soars majestically, high above the rhythm section with a translucent, celestial tone at times (“William, It Was Really Nothing”), just to be dipped in dirty reverb (“Panic”) or twisted into something extraterrestrial and mechanical (“How Soon Is Now?”).
At the forefront is the baritone drone that is classic Morrissey. A voice that’s to Ian Curtis or Robert Smith what Tom Petty is to Lou Reed or Bob Dylan. Yet, there is something unarguably unique in Morrissey’s delivery.
On “How Soon Is Now?” it’s stark, almost spoken. Yet, without hardly straining his vocal chords, he sings in the desperation of a broken heart. He proves he’s not afraid of straying from his dismal baritone towards a falsetto on tracks such as the darkly satirical “Heaven Knows I’m Miserable Now.”
What you have here is white guy dance music for the troubled artist.
It’s not just for the troubled artists, though. This is contagious ’80s pop at its best. It works as well blaring in your car as it does playing softly in your bedroom.
More importantly, it’s music that is, at its core, deeply human. It’s never all black or all white, never all happy or all sad, but it’s music that expresses itself passionately and isn’t afraid to redefine itself at any moment.
Despite the despair, The Smiths are fun and  worth taking a minute to really listen to.
For those unfamiliar with The Smiths, “The Sound of the Smiths” serves as a great overture. It’s certainly not an excuse to pass on albums such as “Meat Is Murder” or “The Smiths,” but as an album, it works well and succeeds in capturing the gist of what The Smiths was.
Unless you’re the faux-hipster wearing his year-old, favorite Smiths shirt that’s only been washed once and still haven’t bought a single Smiths’ record, this might not be an imperative.
Britpop might not be your cup of tea (pun intended), and you may keep your distance from ’80s dance music, but if you’ve got a soft spot for well-crafted pop, you might want to take the time to hear the “tortured pop vocalist” act straight from the horse’s mouth.
After all, The Smiths taught your favorite band how to dress the part.
More from VoiceMore posts in Voice »