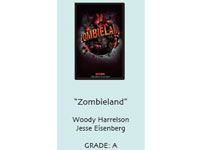 Zombies have been an important element of the horror genre for decades, appearing in twice as many movies as either vampires or werewolves ever did in that same time span.
What makes zombies so compelling? Is it the fact that they just keep coming back for more, no matter how many are killed? Is it the devastating plot that comes with them, forcing a few average civilians to band together to fight the mindless horde? Or maybe it’s just the way zombies say “BRAINS!” as they gradually approach with their bloody mouths agape.
Either way, it can’t be doubted that zombies are a major icon of horror pop culture. However, they’ve sadly failed to produce a decent flick since “28 Days Later.”
However, I am here to tell you the wait is over.
The accurately titled film, “Zombieland,” not only crafts a magnificent zombie flick with plenty of violence and brains, but it is also by far one of the best films to come out this year with its hilarious cast and its unplanned mishaps that really make this film the biggest surprise of the year.
The story starts out with one of the most cautious and paranoid people you will ever see. Columbus (Jesse Eisenberg), like most people, is on the run from the infection. The infection begins when a man takes a bite from a bad hamburger, turning him and everyone he bit into a mindless carnivore.
While the basis for the plot is simple in form, it is much appreciated in that it gets how everything happened out of the way and gets on to what is happening in the story now which is what makes this film shine. Along the way, Columbus meets some wearied travelers, most notably the badass and cocky Tallahassee (Woody Harrelson).
When these two appear on screen together, it is cinematic magic at its finest. Columbus says one thing, and Tallahassee makes an amusing, snide comment to combat the weird wisdom of his newfound friend. The result is some of the funniest moments in film I have seen in recent years.
Of course, these two survivors encounter some unlikely friends along the way in the form of the deceptive Wichita (Emma Stone) and her kid sister Little Rock (Abigail Breslin). These women provide some amusing frustrations for our two characters by stealing their supplies and hijacking their vehicle when they least expect it.
Eventually though, everyone puts their differences aside and tries to make it their mission to find the last supposedly zombie-free area in the country: an amusement park in Los Angeles.
From there, it’s all about these characters traveling from one location to the next, causing some hilarious mischief, while of course disposing of zombies in some very inventive ways.
Although the film is short, a lot of ground is covered in the time span, and it really runs the gamut of everything a great film should contain. From the side-splitting dialogue, to the well developed plot, to the diverse cast, you keep wanting more even after the credits finally roll at the film’s satisfying conclusion.
The movie combines all of its unique elements so adeptly by never spending too much time on one thing, but never moving too quickly from scene to scene at the same time.
Simply put, “Zombieland” is not only one of the best zombie films in recent memory, but is by far one of the best films to grace the theaters this year with its stupidly hilarious characters and a compelling yet satisfyingly simple plot that makes this cult classic zombie e x t r av a g anz a one everyone will love.
More from VoiceMore posts in Voice »