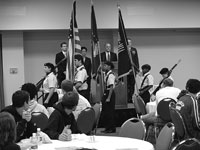 Students and faculty came together Monday in the Michel Student Center ballroom to honor the Constitution.

The sounds of “American Fanfare” accompanied the smell of hamburgers and hot dogs as Constitution Day got underway.
A Fourth of July atmosphere surrounded this year’s program, which consisted of guest speakers, musical entertainment and a presentation by the ROTC.
Vice President for Student Affairs Alan Galsky opened the program with welcoming remarks and was followed by the Peoria Central High School ROTC Color Guard’s presenting of the flag.
The Bradley Symphonic Winds and the Bradley Chorale performed the “Star Spangled Banner.” University President Joanne Glasser and Lt. Col. Ray Hart, professor of Military Science at Illinois State University and Bradley, were the guest speakers.
Hart said he was looking forward to speaking about the Constitution and what it meant to him.
“Article Six in the Constitution requires military officers to take an oath of office,” he said. “I think it is a great opportunity for students to come out and remember what the Constitution is all about.”
In her speech, Glasser said responsibilities come along with the freedom of living under the Constitution.
“The Constitution is a reminder of our liberties and our most important freedom, the freedom to vote” she said. “That reminder is especially important this year when there is a critical election just seven weeks away. I urge all students to take advantage of this most sacred privilege. Register to vote by Oct. 7 and then exercise your most fundamental right.” 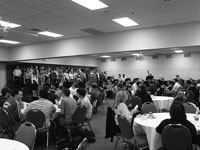 This was the university’s fourth Constitution Day, and it is celebrated in accordance with legislation which was passed several years ago.
“About three years ago, the federal government passed a law which states that all colleges and universities have to have a program to help celebrate the knowledge and the existence of the Constitution,” Galsky said. ”There is a lot of leeway in how universities do this and how this can be done. We have chosen to do it with guest speakers and in a picnic style fashion. We would have liked to have it outside, but the weather did not cooperate.”
Professors encouraged their students to attend the program and some freshmen who did, and presented proof, received extra credit.
“I was very pleased with the turn out of the Constitution Day,” Galsky said. ”There were about 600 students who attended the program and I think it went particularly well since, due to the weather, the program had to be conducted indoors.”
Glasser also gave her stamp of approval.
“I thought the Constitution Day was very poignant and I was glad to see how many students attended,” she said. “It shows that Bradley students are engaged and care about their community.”
More from NewsMore posts in News »