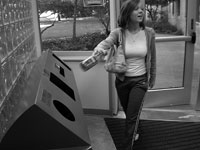 There are 38 recycling bins on campus, but some students said they are unsure of the extent of Bradley’s recycling program.
“I don’t think they recycle at all. I heard the recycling bins at Bradley are left over from when they used to recycle,” sophomore engineering major Todd Jelken said.
But recycling does exist on campus. The university has a contract with the Peoria Disposal Company to collect plastic, aluminum, office paper and newspaper.
Kevin Crowley, the director of recycling, said he makes sure industrial recyclables, such as fluorescent light bulbs, ballasts and batteries are specially collected because such items must be processed differently.
Recycling space for these items is currently limited to the Duryea East parking deck, because Robertson Memorial Fieldhouse, which originally stored the recycling, is now demolished.
Crowley works in conjunction with the Student Environmental Action Coalition headed by student Alyson Jordan.
SEAC works to raise student awareness of the benefits of recycling, as well as making sure recycling is picked up. In addition, the group is working to make more recycling receptacles available on campus.
Four years ago, Ryan Pickering and Jason Miska started the recycling project. Today, they, along with Caryn Musilala and Nick Berkhardt, work with Crowley to take the recycling out, using Bradley maintenance trucks for the job.
“We all believe in recycling and the green cause, so the money isn’t the most important part,” Berkhardt said.
He also said by not recycling Styrofoam and tin cans, students can make SEAC’s jobs a little easier.
“Also, we want to encourage all students and faculty to recycle as much as they can. It helps us and the environment,” Berkhardt said.
Despite all this, some students said information on recycling on campus is obscure, and the recycling program is perceived as lacking.
Senior administration of criminal justice and sociology major Sharika House said she would like for the campus administrators take a more active role in recycling.
“I would like to see bins placed on every floor,” she said.
But there are changes due for recycling in Bradley’s future.
For example, sometime in the near future, glass recycling will become available, Crowley said.
Before doing so, various logistics must be figured out such as adapting changes to make the normal four-compartment recycling bins accommodate glass. Also, more recycling bins will be placed around campus. In order to view the locations of the bins, students can visit the SEAC Web site at www.bradley.edu/campusorg/seac/recyclehere.html.
Crowley said everyone can do their parts to help recycle, not just SEAC.
“The green team is everyone on campus that takes care of and puts items into receptacles,” Crowley said. “It includes the students, faculty, administration.”
More from NewsMore posts in News »