Students can enjoy more than just a cup of joe and a Danish while studying, as one local coffee shop offers mixed drinks, pizza and more.

“We started out as just coffee and pastries and then expanded after the first year and obtained a liquor license,” Carrie said. “We then decided to do pizza [and calzones] … so it just kind of built from there.”

Carrie said she and Jeremiah have seen such a good response from selling pizza and calzones that sandwiches, soups and salads will soon be added to the menu.

“We maintain a connection to the coffee origins, but we are kind of diversifying,” Jeremiah said.

The Schmillen’s said almost everything they sell is homemade. 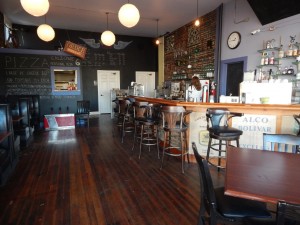 “We make our own dough from scratch, we shred our own cheese and use our own fresh ingredients,” Carrie said.

Jeremiah added that he makes the syrups used for drinks, and they are working on making in-house mustard, pickles and aioli.

Jeremiah said they try to support the Peoria art scene by hosting events for local musicians and rotating art pieces in and out of their venue.

“We’re trying to create something different,” Jeremiah said. “A lot of people comment that they can’t believe this kind of place is in Peoria, and it’s something you expect to see in a big city.”

Sophomore television arts major Gabriella Mastropaolo said she has been to Broken Tree a handful of times and recommends other students visit.

“[Broken Tree] has a unique style and attracts different kinds of people, which is really cool,” she said. “You don’t have a lot of small coffee shops like that.”

Broken Tree is open from 3 p.m. to 10 p.m. Tuesdays through Thursdays, 3 p.m. to midnight Fridays and noon to midnight Saturdays.