Students kiss and tell during ‘Art of Kissing’ lecture 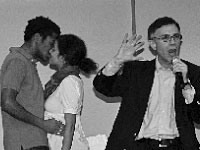 Whether you kiss on a daily basis, are just beginning to experiment or have always been too afraid to try, William Cane has a tip for you.
He presented his lecture “The Art of Kissing” this Wednesday in the Michel Student Center Ballroom.
Cane assured the audience, of well over 150 students, there is always something new to learn with kissing.
“Some [of you] may be thinking ‘I’m way beyond my first kiss’ but there is always a chance for a new first kiss with a new person,” he said.
There were tips for men and women gathered from a survey taken by 100,000 people. Including, “Most guys don’t mind lipstick but at least 8 percent like it, especially if it’s something flavored.”
About two-thirds of girls do not like stubble on their boyfriend but one-third does.
“After two days of not shaving [my boyfriend] looks kind of like a cowboy and I just want to ride away with him into the sunset,” said a girl Cane quoted from his book, “The Art of Kissing.”
Cane also gave tips for the men.
“Neck kissing is vitally important to [women]. They like being kissed on the neck ten times more than men,” he said.
More than a dozen different types of kisses were discussed and demonstrated by couples on stage. The stage had enough chairs for four couples, but there were only two on stage. Both of the couples were volunteers the Activities Council invited to participate.
Some of the kisses that were shown included The Lip-O-Suction, the Candy Kiss, the Upside-Down Kiss and the Vacuum.
The Lip-O-Suction involves taking turns biting on each other’s lower lips. The Candy Kiss has the two people trading a mint or candy back and forth while kissing. And the Vacuum involves one partner sucking the air out of the other and, “deflating [their] partner”.
The couples often played out scenarios described by Cane while walking through the crowd. They involved everything from making out in the car to fantasizing about your dentist while getting your teeth cleaned.
He offered many helpful hints for any kissing couple and even those who did not have a partner to kiss.
“The best way to practice kissing is with your imagination,” he said.
He also mentioned a few tips for putting excitement back into kissing.
“Try kissing to music but kiss only on the beat,” Cane said. “Or sometimes a bite can liven up a kissing session.”
He also demonstrated French kissing by having two people wear big, red pillowcases and pretend to be a pair of tongues.
Cane then “dove” in between the tongues with a pair of goggles on, explaining that the main problem with French kissing, expressed by both sexes, is the lack of variety.
“If you want something more advanced then do some rotations or play chase, [but] whatever you do don’t trigger the gag reflex,” he said.
The finale of the lecture involved a description of how people kiss in other countries.
The couples also did a demonstration of making out in the car while driving.
Eventually the girl is straddling the guy while he is still driving on the road and as they were kissing Cane said, “Now this is American kissing at its very best.”
Cane has written “The Book of Kisses,” “The Art of Kissing” and “The Art of Hugging.”
More from NewsMore posts in News »