Basketball takes first trip outside of the U.S. in more than 20 years 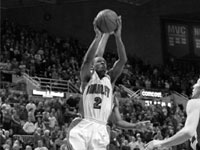 When basketball seemed to be the furthest thing from anyone’s mind, the Bradley men’s basketball team took a summer trip to Brazil for the ninth annual COPA EPTV De Basquete Tournament in Sao Carlos, Brazil.
The tournament included eight teams, five from Brazil’s top professional league, two second-division clubs, and the Braves.
This marked the first time Bradley basketball left North America for a foreign tournament since 1985. During that trip to Italy, current head coach Jim Les was the senior point guard for the Braves.
“[Les] must have known how much a trip like this would influence the bonds that this team would make,” sophomore forward Taylor Brown said.
The Braves left for Rio de Janeiro on Aug. 6 and played a scrimmage game against Fluminese on Aug. 8. Despite the long flight, Bradley won 82-61 behind junior point guard Sam Maniscalco’s 17 points.
Brown added 13 points and a team-leading nine rebounds. Senior guard Chris Roberts also had an all-around solid game with 13 points, six rebounds, six assists, three steals and two blocked shots.
Brown said playing in a different country in front of a totally new crowd showed how warm the people of Brazil were.
“As soon as we arrived in Brazil, we were treated as superstars,” he said. “It felt weird because everyone was rooting for us. They definitely embrace Americans and it felt great.”
On Aug. 11, the Braves took a nine-hour bus ride to the site of the COPA EPTV De Basquete Tournament in Sao Carlos. Neither of Bradley’s centers were 100 percent healthy.
Senior Sam Singh had an overnight sickness from food poisoning and junior Will Egolf experienced stiffness in his surgically-repaired left knee because of the long bus ride.
Trailing by a score of 37-35 at halftime, the Braves turned it on at the end of the third quarter when senior Dodie Dunson scored five straight points. The Braves kept up the intensity and went on a 19-1 run that completely opened up the game.
Despite being short on players, Bradley won by a final score of 83-58. The Braves finished the game with five players in double-digit points.
Sophomore Anthony Thompson recorded a team-high eight rebounds.
In their second game, the Braves took on Lupo Ararguara. The Braves overcame an eight-point deficit with 2:21 left in the fourth quarter.
Lupo Ararguara took a one-point lead into the last 5.1 seconds, but the Braves had the ball on the sideline.
They inbounded to Maniscalco, who came off a pick by Roberts and put up a floater. The shot missed, but Brown was there to tip the ball in as the buzzer went off, saving the game for the Braves.
Maniscalco led Bradley with 22 points, including five 3-pointers. Roberts added 17 points, Dunson scored 15 points and Brown also recorded 16 points, eight rebounds and four steals.
Up to this point, it had seemed destined for the Braves to win the tournament. Now playing for a spot in the championship game, the Braves lost their first game to Paulistano 70-63.
The Braves were in the game up until the end when Paulistano went on a 14-0 run to end the game. Roberts had 15 points, eight rebounds and five steals.
Maniscalco added 14 points and Brown had 12 points with seven rebounds. The Braves then went on to win the third-place matchup with a score of 101-81 over XV de Piracicaba.
“Even though we travel together during the regular season, 10 days together in a different country definitely brought both the coaches and the players together,” Brown said. “After the last game for third place, we probably took 50 pictures together. If everyone could live like the Brazilian culture on the Bradley campus, it would feel much warmer and inviting. Just a simple hello in the hallways would change a lot.”
More from SportsMore posts in Sports »