Braves come back to put Bears in hibernation 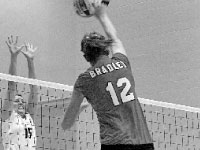 Sam Black played her final home game in front of a legion of supporters and gave an unforgettable performance to lead the Braves past a shocked Bears team, 3-1.
“The crowd really had a big part to do with it and being my last time here got me going,” the senior said.
After falling in the first set, 25-14, Bradley looked on at Missouri State, which looked relaxed and uninterested in the match-up.
Then the Braves broke loose.
“We had some problems in the first set, but we talked about going back to our game plan,” coach Sean Burdette said.
Sophomore Megan Schmidt broke open the second set with a block and a kill to give the Braves a quick two-point lead.
“It was our last home game,” Schmidt said. “With so many fans watching it just gave me that fire to go out there and take it from [the Bears].”
Sophomore Emily Austin added on to a Braves’ lead which was never relinquished with five kills in the set.
Austin described her career-best performance of 15 kills in the match as “amazing.”
After capturing the second set 25-22, the two teams went into intermission with one set a piece.
The break didn’t cool off the Braves, as they continued to shut down the offensive game plan of the Bears.
Missouri State’s defense was resilient, though, as the two teams battled to 12 ties and five lead changes in the third set.
Point after point was traded off and it wasn’t until the score was 23-23 when Bradley pulled away.
Austin notched another kill, and Missouri State crumbled under the pressure with an error to end the set.
On the verge of beating the Bears for the first time since 2000, the Braves fell behind 3-1 to start the fourth set.
No one on Bradley’s side of the court was worried though, the players said.
“Once we got the momentum, I knew it was all ours,” Schmidt said.
On this night no lead was going to quiet the Braves as every person was firing on all cylinders.
“We’ve said all season long we need everybody every night and every point, when we play well as a team together, this is the end result,” Burdette said.
The squads were tied at 18-18 when Black hammered a kill in the middle of the court.
“I knew if I would dump  it twice in a row they wouldn’t be ready for it,” she said.
The kill ended the Bears’ offense as the Braves went on a 7-0 run to finish the match.
Junior Amy Reichel delivered three of the final four points with kills as the crowd gave the team a standing ovation.
Black finished her night with nine kills, a career-high, and season-best 50 assists.
“It’s tough to ask that for a setter, but she’s capable to do that,” Burdette said.
Today the Braves will play against Drake, a squad they took to five sets last time, and tomorrow Creighton.
“I think we want to continue our defensive effort that I thought was very good this past weekend,” Burdette said.
In his first year on the Hilltop, Burdette said he has learned one very valuable thing about his ladies.
“I have learned how this team has become a fighter,” he said. “I think we’ve certainly put Bradley volleyball back on the map.”
More from SportsMore posts in Sports »