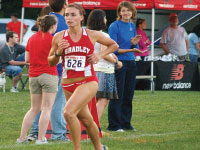 The women’s track team traveled to Palo Alto, Calif., and came back with more than just sunburns.
Junior Mary Goldkamp and senior Katie Nowak came away with the top two times in Bradley history in the 800-meter run.  Goldkamp won the race at the Stanford Invitational in 2:12.29 and Nowak was second with a time of 2:12.54.  Both of these times eclipsed the school record of 2:12.80.
Before heading off to Stanford, the Bradley women’s track team headed to the University of Tulsa during Spring Break.
The only difference between most Spring Break destinations and the Tulsa Duels was the fact that it was 18 degrees with 3 inches of snow outside.
“We knew the bad weather was coming in before we left. But it was much worse than they were predicting,” coach Dave Beauchem said. “We had planned to compete through the entire list of events. But due to the weather we only competed in three events, so we were able to keep the effects of the weather to a minimum.”
Despite the reduced competition, Bradley was able to achieve six top-10 finishes. Freshman Nicole Benson was Bradley’s top performer, with a second place finish in the 1,500 with a time of 4:56.
“I think Nicole will continue to progress through the outdoor season,” Beauchem said. “She still has a lot of things she is working to improve. As those things come together, Nicole’s best days will come, as well.”
“It is hard to measure anything from the Tulsa meet,We needed to compete to finish out the trip. But the weather was so bad, for most of our team, they were just getting across the finish line,” he said.
But the wintery weather of the Oklahoma springtime also provided time for the team to gain some valuable training.
“We adjusted our training plan and put in an extra track workout, knowing the meet was going to be difficult, if not canceled entirely,” Beauchem said. “So we were able to make an adjustment and really get some good work done on the University of Tulsa track facility. That is going to pay off for us for the rest of the outdoor season.”
More from SportsMore posts in Sports »