Soccer wins big against No. 1 UCONN 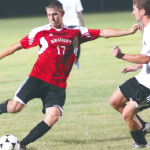 Junior Zach Kovacevic scored on a penalty kick in the third minute, and 87 minutes later Bradley had its biggest regular season upset in school history.

“[This win is] great for the kids, great for the program,” Coach Jim DeRose said. “It’s something they’ll remember for the rest of their lives.

“It continues to get our name out there. Anytime we can put a UCONN on the board it continues to get Bradley out there on a national level. It has no bearing on what will happen this weekend or three weeks down the road, but for one week it’s great for us.”

The Braves were awarded the early penalty kick when senior Chris Olivera was fouled by UCONN’s All-American keeper Andre Blake in the penalty area trying to receive from sophomore Grant Bell.

Kovacevic, who had taken only two shots in his entire career, calmly drilled the kick down the middle past Blake for his first career goal.

“I knew this guy was a freak athlete, and if I hit it to either side, he was going to get it,” Kovacevic said. “It was a bit of a risky move, but I chose to go with it.”

For the next 87 minutes, it was all about protecting the one goal lead.

“I thought the first half was pretty normal,” DeRose said. “Then obviously they came out after halftime and were definitely more attack minded. We were on our heels a little more at that point, and we tried to keep the 1-0 lead and maybe get something on a counter attack. I thought the kids did a good job with it.”

UCONN outshot Bradley, 7-3, in the first half, but in the second the Huskies had 13 shots, including their first shot on goal in the 68th minute.

Enter senior keeper Brian Billings, who earned his second Missouri Valley Conference Defensive Player of the Week award this week. Billings made five saves in the second half to preserve the lead and ultimately the victory.

“The recipe for an upset is great goal keeping and, with him back there, when we make a mistake or two he can bail us out,” DeRose said. “What made Brian’s night so great is he did all the little things right.”

It was Billings’ third shutout of the season and the 16th of his career.

The win over a top-ranked team was just the second in the history of Bradley athletics. The first came in 1961 when the men’s basketball team beat No. 1 Cincinnati, 91-90, at Robertson Memorial Fieldhouse. The soccer program improved to 1-4-0 against No. 1-ranked teams.

The Braves are now 3-2 on the season and overcame what was a terrible two-game stretch in the UNLV Nike Invitational, where the team was outscored 7-3.

DeRose said he was proud of how the team responded against the best team in the nation after playing so poorly in Las Vegas.

“We’re a team that doesn’t have a tremendous amount of next level pro guys,” he said. “We’re a team that’s going to be in tight games. I think the thing I was most impressed with was their learning curve coming out of Vegas. I think this gives them the confidence that any game on the schedule can be a win but they’re also mature enough and humble enough to know Vegas isn’t that far in the rear view mirror.”

The Braves will go on the road to play Denver and Air Force this weekend before returning home to face No. 3 Cal State Northridge on Sept. 28 at Shea Stadium.