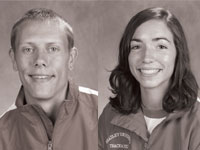 The women’s cross-country team finished second and the men’s team finished eighth at the sixth annual Bradley Classic last weekend.
“Team-wise, we ran pretty well. Individually we still have some work to do,” coach David Beauchem said.
Four Braves finished in the top-25 in the women’s 6K race and junior Zach Bowling set a personal best in the 8K race at 26:01, finishing 20th.
In the men’s 8K race, four Braves finished within 10 seconds of one another including senior Pat Greene, freshman Jon Richards, junior Andrew Wieser, junior Billy Miller, recieving 20th, 43rd, 46th and 51st place respectively.
Redshirt freshman Nicole Benson received her fourth top-10 finish after placing seventh. Junior Mary Goldkamp also finished top-10, taking home ninth place. Senior Katie Nowak and freshman Emily Gustafson finished top-25 with 12th and 23rd place respectively.
Benson, Goldkamp Gustafson and senior Amanda Switzer all set 6K personal bests.
“I thought it was clearly the best men’s team effort of the season,” Beauchem said.
Wisconsin earned the women’s tournament title with 76 points and the University of Windsor received the men’s title with 40 points.
“Our expectations are for the eight women we race at the MVC meet to each have their best cross country of the season,” Beauchem said. “If we do that, the team results will take care of itself. If we don’t do that, it won’t.”
More from SportsMore posts in Sports »
We want to let you know that we use cookies to ensure that we give you the best experience on our website. If you continue to use this site we will assume that you are okay with it. Sounds good