A clean bill of health for Glasser 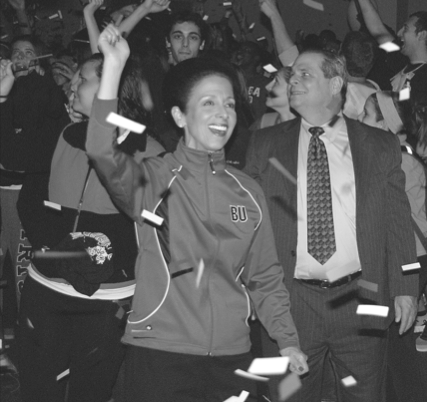 University President Joanne Glasser is recovering from surgery and returned to campus earlier this week. Glasser announced she was diagnosed with breast cancer in December and underwent surgery later in the month.

“No one really ever thinks they will be struck by cancer and hear those words, ‘you have cancer,’” she said. “I eat healthy, I take care of myself, there is no breast cancer in my family. But this insidious disease can land on any doorstep.

No one is immune.” This is the second time the presi- dent has been diagnosed with breast cancer and received treat- ment for the disease. She was first diagnosed with breast cancer in December 2008. “Of course I was disappointed, but I always understood a reoccurrence was a possibility,” Glasser said. “However, I have maintained a positive attitude from the moment the cancer was discovered because I believe attitude is an essential element in defeating cancer. You can choose to live a life of joy and optimism or bitterness and regret. I choose to lead the former.” As a result of routine examinations and early detection, Glasser said she does not need any additional treatment such as follow-up radiation or chemotherapy. “I can’t stress enough how important it is for all of us to be judicious in maintaining our annual visits to our physicians,” she said. “It is important to get breast cancer out of the shadows and continue to promote screenings and early detection. It saves lives. If my example can lead one woman to get a mammogram or see a doctor, it is worth it.” Glasser has been away from campus to recover for the past three weeks. Even though she was not in her office, she continued to play an active role on cam-pus. “I have been in daily contact by phone and email with all of my cabinet members, office staff, and many others since my surgery,” she said. “I have participated in conference calls and committee meetings to keep involved in the life of the university, and have continued to participate in all decision making.”

Even though this is her second time battling a life threatening disease, Glasser said she has never considered stepping President. “I am an optimistic person by nature and have always been,” she said. “ Life is a journey that’s filled with obstacles, setbacks, and disappointments along the way. But never giving up, believing in yourself, maintaining a positive attitude, and moving forward is powerful energy that will help lead you toward a meaningful and fulfilled life.”