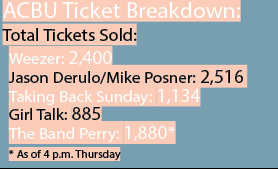 Tickets for the Spring Concert featuring The Band Perry are selling fast, and ACBU concert coordinators have their fingers crossed for the first sell-out in the Renaissance Coliseum.

As of 4 p.m. Thursday, a total of 1,880 tickets have been sold for the April 21 event. Of those tickets, 762 have been sold to public, 748 to students and more than 300 tickets to faculty and staff. The first day of public sales alone, approximately 500 tickets were sold.

“I think ticket sales are going pretty good,” said Assistant Director of Student Activities Lauren Sandstrom. “The [ACBU coordinators] are ecstatic and we have seen a positive response from students and the public.”

Sandstrom said she has confidence that the concert is on track to meet the highest record sales for an ACBU concert in the Renaissance Coliseum.

“If you’re on the fence about going to the concert, get your tickets now,” Sandstrom said.

“It is very likely [that the concert sells out] and that’s why we’re pushing that students buy [tickets] now,” he said. “We don’t want tickets to sell-out and have students not be able to get tickets.”

All ACBU concert coordinators said they were excited about the positive response of ticket sales.

“It would be great for ACBU and SERF [Special Events Reserve Fund] as a committee if the show sells out,” said Concert Coordinator and junior management and administration major Jennifer Hoekstra. “It will show that we are committed to bring what students want on campus and we are listening to their suggestions.”

To promote the show, ACBU concert coordinators have been seeking fans on and off-campus.  So far, ACBU has coordinated advertisements at two country radio stations as well as ticket giveaways and posters on campus.

Over the next few weeks they will also have an electronic billboard and will post flyers in the community.

In addition to traditional marketing efforts, ACBU coordinators said they are exploring the possibility of hosting contest for a meet and greet opportunity with The Band Perry before the show.

Once finalized, the contest will ask students to submit anything creative, such as an original video, poem or piece of art, which is inspired by or relates to The Band Perry.

“[This contest] will keep students involved in anticipation for the concert,” Hoekstra said.

Tickets for The Band Perry concert on Sunday, April 21 at the Renaissance Coliseum are available at the Coliseum Box Office. Student tickets are $15 through April 1 and $20 starting April 2. Faculty and staff tickets are $20 and public tickets are $30.