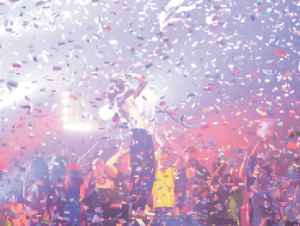 The Activities Council of Bradley University (ACBU) held an open forum at the Garrett Center on Monday to gain a better understanding of what students look for in a campus concert.

Currently, ACBU has a list of potential headliners for the spring concert. By holding forums and surveys, ACBU hopes to narrow down the list to one headliner that will appeal to the whole campus, said junior mechanical engineering major and SERF coordinator Olivero.

There is no plan to release the list of potential headliners, he said.

The forum only had a few students in attendance, but those who came were very opinionated. Discussion topics ranged from whether ACBU should provide refreshments to the location of the concert itself.

“I felt like the attendance to the forum was disappointing, but we received some great feedback,” said senior public relations major and SERF coordinator Hardy. “So I would say the event was successful in the sense that we learned ways we can improve, but I would say it’s unsuccessful since not many students felt compelled to attend.”

One issue that came up was the adoption of the “General Pit” system in spring 2012. When using this system, students who are first in line to buy tickets will be given the privilege of being allowed into the concert before everyone else. This system avoids the problem where students have reserved seats, only to find someone else had shown up early and taken them.

“I don’t know the staying power of this system, but it was something that was encouraged [by faculty] to do,” said Hardy. “It’s fine. I’m not staying it’s perfect, but we had to try it.”

Another discussion issue was the price of tickets for non-Bradley students. In past years, tickets have been available to Bradley students for 10 to 15 dollars. However, tickets for those without a Bradley ID were drastically more expensive. Senior public relations major Alan Bukingolts said he would like to see that changed.

“I know that we’re really strict where you have to have a Bradley ID to get a ticket,” he said, “We have to have a system where if you want to bring a friend, you have a ticket be $15 or $17 but still cheaper than the public price. The [friend] would just have to be in [college] to get that.”

ACBU may be keeping its plans under wraps, but students are more than willing to share their ideas.

“I want to see someone that brings excitement to the student body,” said Bukingolts. “Ideally I’d like a huge name, and I think we can attract that… I think the first thing that needs to be decided is what type of artist we want, then figure out the actual performer.”

Despite the low turnout of students, Hardy said the forum was helpful for SERF.

“The most valuable aspect of the forum was the feedback we received in terms of ways to sell tickets and concert seating,” he said. “It is our hope to make both of these aspects of our concerts better for Bradley students.”