ACBU uncertain if there will be a big name fall performer 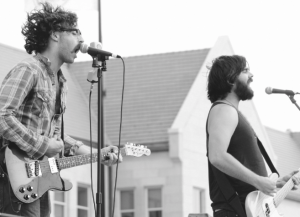 The Activities Council of Bradley University hosted their first, and maybe their only, big event of the semester last Saturday. Currently, ACBU is unsure if there will be a fall concert.

ACBU collaborated with  +Music and Brave Sounds Entertainment to coordinate a free music festival called BORDERLINE: A Music Festival, on the Alumni Quad. The eight-hour festival featured six bands, many of which were from the Chicago area. This was the first time ACBU had coordinated a daylong music festival.

Throughout the day many students visited the alumni quad, drawing a larger crowd for Parachute and The Cool Kids. Although the festival was well received by students, other ACBU concerts in the past haven’t had as much luck.

ACBU’s concerts last year had low-ticket sales as well as low attendance. ACBU President Bryant Au said they are not sure if they will be having a fall concert.

“We are going to look at what tours are available and if it is worth the money,” he said.

Even though ACBU had a difficult year for ticket sales, the student activity fee was raised this fall from $130 to $170, with the intention of giving concert coordinators more buying power when choosing headline artists for semester concerts.

Even with the raise in funding, Au said he is not certain a fall concert is possible. He said other events have pulled from the Special Events Reserve Fund (S.E.R.F) for ACBU concerts without their knowledge.

“We have enough money to put on a concert,” Au said. “But unless an artist comes down in price, it would be a mediocre concert. We are doing the best we can and we are frustrated with the process but we don’t want to waste students’ money.”

Event though there may not be a big concert this fall, concert coordinator Montel Hardy said it only means they will have a larger budget for a spring semester.

“I don’t think this campus will be at a loss if we don’t have a fall concert,” said Hardy. “There are always lots of smaller concerts on campus throughout the semester.”