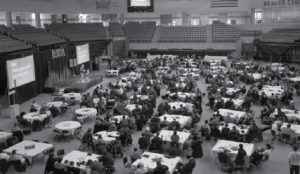 The Bradley chapter of the Alpha Epsilon Pi (AEPi) Fraternity is often recognized for their annual foam party. However, this past weekend the brothers of the fraternity hosted a much bigger event on campus, the AEPi 2013 Midwest Regional Conclave.

This event is a convention where 30 chapters of the AEPi fraternity come together from across the Midwest to learn from other chapters about the best practices within the organization. Over the past weekend they discussed topics such as risk management, leadership and brotherhood. There are five of these events each year, and they average about 400 attendees.

“This year through great planning and execution we were able to host the largest Midwest conclave ever with more than 500 attendees,” he said.

Considering Bradley is one of the smaller AEPi chapters, Lehtman said the number was outstanding.

Since the national AEPi office usually only picks large schools to host this event, it was extremely rare that Bradley was chosen. But, because the Bradley AEPi chapter is revered as one of the best chapters within the fraternity, Lehtman said, they were selected as the hosts this year.

“It is a great honor to host a conclave and many schools of our size could only dream about this,” Lehtman said.

This conclave was overall a tremendous success, Vice President of Communications Shelley Epstein said. Epstein, also the AEPi Bradley chapter advisor, was honored at the conclave for his outstanding service to the fraternity.

“The AEPi executive staff repeatedly commented about how this conclave was one of the biggest and best in recent history,” said Epstein. “The Bradley AEPi brothers did an outstanding job planning and executing the conclave so that our guests left with a very positive impression of the university.”

AEPi is one of the largest and fastest growing fraternities in the world with chapters in five countries and 9,000 active undergraduate brothers, and the Bradley chapter hosted the Midwest conclave well, Epstein said.