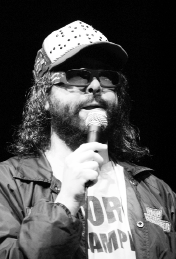 Alpha Phi Alpha Fraternity, Inc. hosted about 500 people Saturday evening at the Renaissance Coliseum for its Winter Comedy Jam featuring Sarah Tiana, Deon Cole and Judah Friedlander. The show, which the fraternity has put on for more than 20 years, was open to students, staff and the general public.

“The purpose of hosting such an event is to provide the students with the opportunity to see a free comedy show… and attempt to get people from other schools interested in traveling to Bradley,” said Alpha Phi Alpha president Alex Deeb. “[It also] serves as an opportunity for us to see some of our alumni.”

The program started with emcee Sarah Tiana, a Los Angeles comedian who was featured on “Reno 911” and seen on E!, NFL.com and the TV Guide Channel. She performed her own act, focusing on relationships and stereotypes.  Her act included demonstrating the racial differences of small talk with women and poking fun at the stereotypes of her Georgia roots. Tiana set the stage by saying that few topics would be off-limits for the evening.

Next was Deon Cole, who is Conan O’Brien’s staff writer and television show guest who is originally from the south side of Chicago. Cole wasted little time getting right into his act, and like Tiana before him, Cole illustrated that few topics were off-limits.

Many of Cole’s jokes focused on race, particularly with regard to his own African American roots. He joked that while driving through Peoria he passed “plantation homes,” questioned why there isn’t such a thing as “B” batteries and even admitted he thinks he is racist.

Attendees praised not only Cole’s jokes but also his delivery.

“I enjoyed all three (acts), but if I had to choose, I would say I liked Deon the most,” said freshman academic exploration program major Danielle Stortz. “I liked his delivery of the jokes the best.”

Judah Friedlander, best known for his “30 Rock” role as Frank Rossitano, was the headliner of the Winter Comedy Jam. Friendlander is on his “Current Champion, Future President Tour,” which was comprised of traditional jokes and the presentation of his presidential platform. It also allowed for significant audience interaction.

Freshman special and elementary education major Joseph Fritzsche attended the show with his cross country and track team, and when Friedlander asked if there were any athletes in the room, the entire team shouted, “Yes!”

“(Friedlander) called me out personally and asked me questions about how far I ran and how good our team was,” said Fritzsche.

Fritzsche said he thought Friedlander’s comebacks and jokes were hilarious, a common sentiment among many in the audience.

Deebs said the success of this year’s show is encouraging for planning future events.

“Hosting another comedy show in the future is something Alpha Phi Alpha plans to continue,” he said. “We can only hope that this trend will continue, and eventually lead to generating enough interest to truly pack the house.”