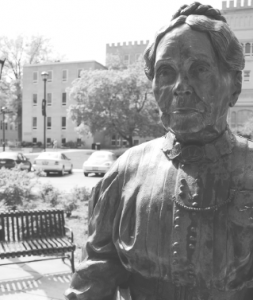 What do you want to do before you die? It’s a question that leaves some quivering in fear and others performing life-altering triumphs.

The Bradley Ambassadors are composing a hybrid bucket list, attempting to address the same question but to a lesser extreme: what do you want to do before you leave Bradley?

Consisting of elements of scrapbooks, scavenger hunts and yearbooks, the ambassadors are encouraging students from all grade levels to get involved in a variety of different traditions before their time at Bradley meets its end.

Ashley Pierce, junior at-risk prevention major and member of Bradley Ambassador’s leadership board, said the idea for the bucket list came from previous years’ list of 10 things to do before graduation.

“We decided to make [the list] into a book,” Pierce said. “[It’s] essentially a life-long commitment to where you do different activities: taking pictures with Lydia, going to Grand View Drive, going to Avanti’s, all that fun stuff; just normal, regular day-to-day things you must do when you go to Bradley.”

As a leadership board, with the assistance of alumni relations, the alumni association and the previous year’s graduating class, the BU Ambassadors received more than 200 Bradley tradition suggestions and are attempting to narrow it down to 40.

“We potentially want to have a tradition’s keeper,” Pierce said. “It’s [someone] that’s completed the 40 traditions in the book. [Student-alumni] would then become a tradition keeper and they would wear that proudly…they can display it and say they completed the traditions.”

“Anything dealing with students or alumni are things I like to do,” Pierce said. “I was actually able to write a portion of the tradition’s book for greek life, which is something else I’m really involved with on campus.”

While all students can participate in completing the traditions, Pierce said they plan on gearing it towards freshmen so they have the full four years to complete them.

“We want to make it a four-year long, life commitment,” Pierce said. “We just want to be able to get our student-alumni out there so the Bradley Ambassadors [can help] students transition from being students to becoming alumni.”