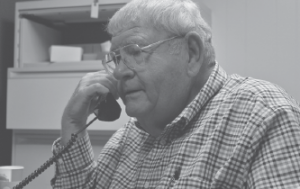 After this school year, a man who has shaped Bradley with his behind-the-scenes work for half a century is retiring.

Ken Goldin, Bradley’s Business Manager, has been on campus for a majority of his life, where he started as a custodian in the fall of 1958. Goldin also earned his undergraduate and master’s degrees here, and his children and several nieces and nephews have attended the university as well.

Currently, Goldin’s duties include overseeing food service, the bookstore, parking, the Student Center, St. James and off-campus housing. He also represents the university on several boards in the Peoria area.

Although he now holds different responsibilities, Goldin said his favorite past position was working with student housing.

“I was the Director of Housing a long time ago,” he said. “I enjoyed trying to accommodate a little over 2,000 students. It was satisfying to set up roommates and trying to get students into their preferred dorms.”

While Goldin has held a variety of titles throughout his years at Bradley, one best kept secret is the off-campus work he has contributed. Goldin represents the university in liquor commissions, works with the community to set up off-campus housing, is involved with Easter Seals and roast committees, took part in “Save the Madison Theatre” movement and is vice chairman on several Peoria boards.

“All of these activities, which the university encouraged me to take part in, showed the community that Bradley was part of it and was committed to them,” he said.

A major transformation to campus throughout the years is the expansion of off-campus living, Goldin said.

“I tell kids that I play monopoly with real money,” he said. “We’ve purchased more than 150 houses and torn down and utilized the space. As the university has grown, I’m the person who has been assigned to go find the land.”

Goldin said a big change over the years has been the increase in material objects belonging to students.

“When students used to [move in at Bradley], they would bring everything they needed in the backseat of their dad’s car,” he said. “Now they need minivans or pickups and U-Hauls. They need more things for school, including electronics. Over the years, the university has had to rewire the buildings for the increase of electronics. The hi-fi at one time was the enjoyment [of going away to college].”

When Goldin was part of Student Activities, he said putting on concerts in the old Robertson Memorial Field House were some of his favorite memories.

“Until ‘82 we did all the entertaining for central Illinois,” he said. “I really enjoyed bringing people to Peoria and meeting them personally, selling out the Robertson Memorial Field House. The community really supported the activities we put on.”

When President Gerald Ford stopped at Bradley in the 1970s, Goldin said he received a pin with Ford’s name on it for his involvement in coordinating the event. He said it is something he treasures very much.

Vice President for Business Affairs Gary Anna said the university is not looking for Goldin’s replacement at the moment.

“At this time, we are not doing a search, but that doesn’t mean it won’t happen later, or that some of Mr. Goldin’s responsibilities will disappear after he retires,” he said. “They won’t, I’ll assume them in the interim. There’s an assessment taking place.”

Goldin said he will miss the sense of community between Peoria and Bradley and the enthusiasm from students the most.

“Each year all of our students are more intelligent,” he said. “I’m proud of this institution and it has a wonderful track record. I won’t be surrounded by young people anymore [when I retire], so it will be a disappointment.”

Despite his retirement, Goldin said Bradley will continue to move forward.

“Being a part of this university by being an alum and in the administration has given me a lot of pride,” he said. “The future looks very bright for Bradley.”