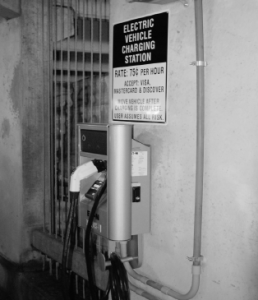 Bradley is continuing its efforts to “go green” by installing electric charging stations for cars around campus.

“Bradley has installed three auto charging stations in the campus parking decks to serve students, faculty and staff with electric and hybrid cars,” she said. “Two are located just inside the main entrance to the Main Street parking deck. One is located on the first level of the Duryea Avenue deck near the back.”

Vice President for Business Affairs Gary Anna said the charging stations were installed over break, and are now available for use.

“We had an inquiry over a year ago from a prospective graduate student asking if we had a station,” he said. “So we decided it was better to put them now as opposed to waiting too long.”

Anna said the profit will be minimal, but that’s not the goal.

“They are more of just a commitment to sustainability,” he said.

Junior English secondary education major Kara Salmon said she would consider buying a hybrid or electric car in the future.

“I do not have a hybrid or electric car, but I could see myself buying one in the future,” she said. “I think the cost of charging stations is reasonable. If I bought one of these cars, I would want charging stations to be readily available and convenient to use.”

Vice President of Student Affairs Alan Galsky said adding electric charging stations was a logical decision because more and more companies are coming out with hybrids and electric cars.

“I think it makes sense,” he said. “In the future we are going to have more electric vehicles than we do now [on campus]. Everyone keeps saying wait another year, but sooner or later companies like Ford and GM will come out with an electric car that is more affordable. College students would be the population to buy. University people in general might be more open, willing and passionate to buy.”

Conver said the charging stations are easy to use and fairly inexpensive.

“Each station has a screen with simple user-friendly instructions and a universal standard connection,” Conver said. “All major credit cards will be accepted at the stations and the cost is 75 cents per hour for charging. A fully discharged battery can be recharged in three to four hours.”

“I think it’s a good idea if the campus has a lot of students with electric cars, and the charging stations are in demand,” he said. “Then the school would benefit from them. But if there aren’t many drivers with electric cars, then it would be hard to make a profit [because it’s so cheap].”

Some students said they are happy Bradley is “going green.”

“Having electric charging stations on campus could give Bradley’s campus a competitive edge in terms of being economically friendly and green,” sophomore international studies major Carrie Brinkmeier said. “I think that electric or hybrid cars, while not a solution to 100 percent oil-dependent vehicles, are still definitely an improvement.”

“I think having an electric or hybrid car would be awesome,” she said. “It would eliminate pollution from gas, and also save you time and money from refilling your gas tank all the time. Especially with the high prices now.”