“B” kicks things off 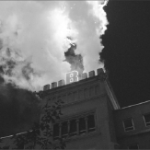 Bradley’s annual Lighting of the B took place Oct. 16 night to kick off Homecoming week.

The “B” itself was 4 feet wide and 8 feet tall placed atop Bradley Hall to serve as symbol for pride and of a bright future for students, staff and alumni of Bradley. Hundreds of students crowded in Founder’s Circle to participate in the festivities.

The celebration began with a speech delivered by President Joanne Glasser, during which she introduced Homecoming King Allen Ghareeb and Queen Kylie Nadeau.

After the king and queen were announced, Lost Soles, Orchesis, Bradley Ballroom and the Bradley Swingers performed. The teams shared one stage and performed to a variety of tunes, such as Canadian pop sensations Tegan and Sara’s “Closer” and a few hits from the Great Gatsby soundtrack. As the dancers gave their grand finale, a countdown was started to the Lighting of the B.

Former Bradley student Justin Sinkfield stopped by for an individual performance, and the Bradley Speech team made a cameo.  Despite the cold, many students filed into long lines for free 2013 Homecoming t-shirts.

“The Lighting of the B was really fantastic,” freshman health science major Holly Sauder said. “The fireworks were a lot bigger and brighter than I thought they would be.”

“It’s the small things like this that made me choose to come to Bradley,” freshman nursing major Alyssa Altmayer said. “I like being a part of traditions that make a school unique.”