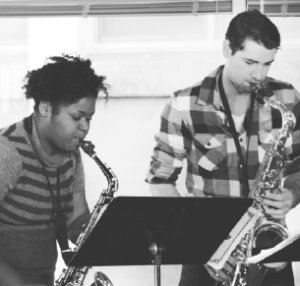 Bradley students and guests gathered for a benefit concert Saturday evening in Lydia’s Lounge hosted by the Bradley chapter of To Write Love on Her Arms.

“I think it [was] a really great event,” said sophomore psychology major and Vice President of the Bradley TWLOHA chapter Ashley Ellerson. “We’re helping raise awareness about the organization for suicide, depression, anxiety and all that. And I think it’s a really great way to get the group known on campus and also bring good

TWLOHA’s mission statement is “a non-profit movement dedicated to presenting hope and finding help for people struggling with depression, addiction, self-injury and suicide.”

Bradley’s chapter was organized at the beginning of last year and has already thrown two concert events helping TWLOHA.

“We had one [benefit concert] last year,” said Kowalczyk. “We had a really good turn out; we raised over $400. For [the] first [time] ever doing this on campus is really great.”

Junior graphic design major Kelsey Lishman helped coordinate the event and said after the success of last year’s event, they knew they wanted to host it again.

“It’s something that we started last year and we just kept wanting to do,” she said. “It’s a way to get local bands here to be heard and a really good way to raise money for the organization itself.”

Ashley Kowalczyk, the president of Bradley’s TWLOHA chapter, said she joined the chapter to support its cause.

“I’ve known about the cause for a few years after reading about it online,” she said. “Some stuff happened in my life my freshman year [that] made me want to get involved with this organization for what they support and what they’re trying to do.”

In addition to collecting an entrance fee, the organization had a merchandise table. All proceeds from merchandise sales will go toward IMAlive, a suicide crisis center.

“[I joined the organization because] I thought [TWLOHA] promoted a lot of great things,” said freshman health science major Alex Giordano.“ I liked what they were supporting and it was something I felt strongly about. When I found out that Bradley had a chapter on campus, I was excited to get the chance to do more with it and promote it more.”