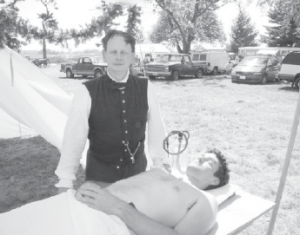 For many, a cemetery is a forlorn place, a final destination to house the remains of former lives and families.

But for 1981 Bradley graduate Jon Austin, the Springdale Cemetery in Peoria is a wealth of history, home to many famous inhabitants including university founder Lydia Moss Bradley and her family.

“I am now as familiar with mummification practices as I am with modern burial procedures,” he said. “The more I learned about death, the more fascinated I became.”

Austin has worked as the CEO for Springdale Cemetery since 2009, and has appeared on the Discovery Channel and the History Channel to comment on burial practices and funerals.

“I am something of a national expert on American funeral customs,” he said.

Austin worked in museums and historical societies in Illinois and New York until 2000, when he was hired as the Director of the Museum of Funeral Customs in Springfield, Ill. There he began his research on funeral customs.

“I had always been interested in the history of families and domesticity, especially in the 19th century, and death was very much a part of that,” he said. “It wasn’t until I worked with the Illinois funeral directors that I was able to get my hands on a collection of materials related to funeral materials. I had to become a specialist.”

Springdale was founded in 1834 and covers more than 223 acres of land, making it the second-largest and one of the oldest cemeteries in Illinois. Though it is so deeply rooted in history, Springdale continues to be an active, evolving cemetery, Austin said.

“We are looking to develop an area for green burial, which is an environmentally friendly way of disposing a full human body,” he said. “It doesn’t require the use of a burial vault or embalming. It is a very new, growing interest.”

Springdale is regarded by many as a beautiful, serene location, one that is frequented daily by joggers and dog-walkers. Unfortunately, this a recent development.

“There were periods in the 1980s and 1990s where one of the last owners was selling property, stealing money and draining trust accounts that were set up 100 years ago,” he said. “There was vandalism and the fronts of crypts falling off, and the grass was four feet high. It was very disrespectful, and it took a number of years and new ownership to get that corrected.”

By day, the cemetery receives plenty of people stopping through to visit a grave or take a stroll. By night, Springdale sees visitors of a different kind.

“We have small groups of individuals who come to the cemetery who feel there is some sort of supernatural force here, and they will sneak in and camp out some nights,” Austin said.

Though he has not heard of cemetery ghost stories, the cemetery has a bit of a dark history.

“There have been several suicides here, and I think that has more to do with people ending their own lives because their grief is so all-encompassing,” he said. “There was also one murder in the ’30s of a young girl. It’s not that we don’t like to talk about it, we just don’t know much about it.”

Through working with death, Austin said he has learned about life.

“I’ve had some interesting and moving discussions with people about their mortality and what’s going to happen to them after death,” he said. “It’s something we all have in common.”