Bradley grad up for House of Rep. election 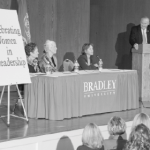 “Robin’s main focus [if elected] is combating the endemic of gun violence in Chicago,” Kelly’s Campaign Manager Jon Blair said. “[Her other goals include] improving education, infrastructure and access to mental health facilities.”

New York native Kelly began her time at Bradley in 1973. While on campus, she became a member of Sigma Gamma Rho Sorority.

“A recruiter from Bradley came to my high school and convinced me that Bradley was the place to be,” she said in an interview with the Scout.

Kelly obtained both her bachelor’s and master’s degrees from Bradley, and then obtained a Ph.D. from Northern Illinois University.

For the past 25 years, Kelly has committed to public service in Illinois. She has worked at the Crittenton Care and Counseling Center, the Youth Shelter and as a director of community affairs in Matteson, Ill. Since 1998, Kelly has worked as a commissioner on human rights in Cook County.

Kelly is still involved with Bradley, having worked here as the minority student services director from 1990 to 1992. She has been a part of the Board of Trustees since 2003 and a board member of the Bradley University Council since 1998. In 2009, Kelly was inducted into the Centurion Society, the elite society that honors alumni who are successful in their chosen career fields.

If elected to Congress, Kelly said she wants to focus on reforming immigration, along with decreasing gun violence and improving education.

“I would definitely be an advocate for higher education,” Kelly said in the email. “Many Bradley folks have helped me along the way.”

The winner of the Republican primary will go head to head against Kelly on April 9 in a special general election. The Tribune reported the 2nd Congressional district is heavily Democratic. Blair said Kelly’s campaign has been “fantastic” thus far.

Her message to Bradley students is simple: become educated and involved in politics.

“Get involved; more women need to run for office,” Kelly said. “Lobby, lobby, lobby. Don’t stand on the sidelines. Know who represents you and what they stand for.”