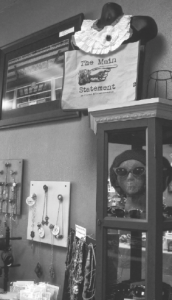 When Matt Coglin was a student at Bradley, he described the overall atmosphere of Main Street as “desolate.”

But he and his business partner Danielle Auth, also a Bradley graduate, said there is hope for the string of stores and restaurants. That’s why they chose Main Street as the home for their new gift and artwork store that opened last month, The Main Statement.

“Main Street was a pretty happening place in the 1970s,” Coglin said. “It’s time for it to bounce back again.”

Coglin said he and Auth were inspired by the arrival of coffee shops and trendy stores along the street, including The Broken Tree coffee shop and Random, a new boutique below Main Street Commons.

“We checked out Main Street and saw all the new artsy places going up, and we thought ‘This is where we need to go,’” he said. “It kind of just fell into our laps.”

Coglin, who graduated in 2011, and Auth in 2010, went to Austin, TX, after graduation. He said they thought the city’s array of small, unique stores would do well in a college town like Peoria.

“We researched towns similar to Peoria, and how stores like ours would do in that kind of area,” Coglin said. “We decided to take the risk.”

The store features artwork mostly created by Central Illinois artists, though there are some products from the Chicagoland area or out of state. Old records turned into coat hangers, winter headbands with BU patches and spoon rings are a sampling of the eclectic variety available at the store.

“We got our supply starting with friends, then friends of friends, then markets and art shows and it grew from there,” Coglin said.

After graduating with a degree in sociology, Coglin said the jobs he worked were unfulfilling, so he and Auth decided to start up The Main Statement.

“We thought, ‘What have we got to lose?’” he said. “Now when I get up, I’m excited to go to our business. I like being my own boss, and it works really well having another teammate.”

Bradley students can turn to The Turner Center for entrepreneurship, a feature Coglin said was helpful to the store’s start-up.

“[The] Turner Center is the place to go if you want to start a business and have a good idea,” he said.

Coglin and Auth said they hope to foster a cohesive campus-Peoria community, and to add to the revitalization of Main Street.

“With stores like Random, Leaves and Beans and the Broken Tree moving in, I think Main Street could change,” he said. “There is strength in numbers.”