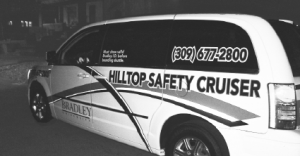 Students pulling late nights on and around campus now have a safe shuttle option for their trip home.

The Hilltop Safety Cruiser is a van that provides transportation for up to six passengers at a time from Moss Avenue to Columbia Terrace and Western Avenue to Sheridan. The shuttle will be driven by trained students, and will operate from 7 p.m. to 3 a.m. every day while classes are in session.

“Over the last seven years we have seen an increase in requests for campus escort service,” said Bradley University Chief of Police Brian Joschko. “We are pleased to make this convenient on-demand transportation available to better serve students and staff.”

Joschko said a student presented the idea of a Bradley shuttle service to himself and Vice President of Student Affairs Alan Galsky, and from there the idea was approved by President Joanne Glasser and received funding from the university.

“The shuttle service is an enhancement to our current police and student escort system,” said Joschko. “So far this new program seems to be well-received by the students and is receiving positive feedback.”

Students said they are pleased with the addition to the escort service and feel it will make a difference in the number of students that use it.

“I feel like students are more likely to take advantage of the [Hilltop Cruiser], rather than calling a police officer, because it makes you feel a lot more comfortable,” said freshman English major Taylor Braastad.

Other students said the addition to the escort system makes them feel safer knowing there are several transportation options on campus now.

“I think this new escort system is a great idea because it provides safe transportation for students so they aren’t walking alone in the dark,” said freshman early childhood education major Taylor Welsh.

Sophomore health science major Jen Wiley said she thinks the new system will encourage students to call the shuttle for a ride rather than walking alone at night, since they won’t have to ride in a police car.

“Riding in a police car may seem uncomfortable to some students, but now we have other options of safe transportation,” said Wiley.

Joschko said that even when the van is not providing transportation, it continues to drive around and act as eyes and ears for the Bradley University Police Department.

“I feel like Bradley and the BUPD are making great and successful efforts to improve safety on campus,” said Wiley. “It’s nice knowing that the university and police department care about our safety.”

Students or faculty members must display a valid Bradley ID in order to ride in the van, and any person who wishes to ride can either call 309-677-2800 or flag down the van.

Driving the Hilltop Safety Cruiser is a paid position, and applications are currently being accepted for the 2013 spring semester, said Joschko. Applications can be picked up at the BUPD in campustown during business hours.