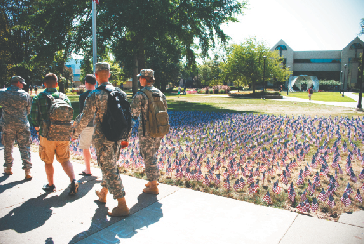 Bradley students and community members were given the opportunity Wednesday to prove that no good deed goes unrewarded.

Hosted by the Jewish Bradley Chabad student group, The Good Deed Mitzvah Marathon took place on the Olin Quad from 11:30 a.m. to 1:30 p.m. last Wednesday.
Participants completed a short form with a good deed of their choice, which was then tacked to a board with photos of remembrance. A sticker was given for acknowledgment.

Rabbi Eli Langsam, who serves as executive director of the Jewish Bradley Chabad center, said the program was intended to spread awareness of Sept. 11 and to reflect on a day of a great atrocity that happened in the world.

“The idea came about because we are a large network of more than 3,000 centers around the world, and we are doing this on almost every single campus,” Langsam said. “Chabad is going out and making this awareness.”

Junior social work major Marti Pine said part of the concept was to show how Sept. 11 can affect others and encourage others to do a good deed on a day of darkness.
“Everyone knows what 9/11 is, and everyone can reflect, but really putting their words into actions and doing something for that helps the school and community grow stronger is important,” she said.
Participants wrote down a good deed, whether it was big or small.
“They can choose anything that they wish,” Langsam said. “From calling their grandmother to calling their mother or just saying a nice word to their fellow friend; whatever they want to do that means something to them.”

Some participants said they enjoyed the idea of doing something simple but rewarding.
“I chose to give a random person a compliment,” said freshman academic exploration program major Margaret Filipic. “It was pretty cool.”

For the twelfth anniversary, Langsam said participants could walk away with more than just a sticker.

“I think students will stop for a moment and think ‘I could do something special today, bring some light into this world’,” he said.