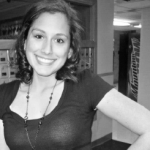 “She just taught us so much about being a fighter, about never losing hope and being optimistic in the face of the worst possible thing imaginable,” Brasen said.

Janes, a sophomore-standing elementary education major from Oak Forest, died Nov. 14 from cancer. She was diagnosed in high school with Ewing’s sarcoma, then relapsed Dec. 2012 with acute lymphoblastic leukemnia. She relapsed a third time in September 2013.

“Julia was a fighter, ever since she was first diagnosed,” Brasen, a junior health science major, said. “She was an innovator, really smart and driven.”

When Janes was a freshman, she established a campus chapter of CureSearch, a national non-profit foundation that funds and supports children’s cancer research. Bradley established the first collegiate chapter for the organization.

“She started CureSearch out of sheer will and determination,” Brasen said. “She got that off the ground, and it was super successful.”

Brasen said she and Janes did not plan on attending Bradley together, since they grew up in different towns and went to different schools. But they both had Bradley on their college lists.

“She was waiting to hear about a full ride scholarship from Carthage College, but she was like ‘I hope I don’t get it,’” Brasen said. “It took her a little while to decide, but she always wanted to go to Bradley in her heart. It turned out for the better.”

Brasen and Janes were roommates their freshman and sophomore years and decided to rent an apartment with junior nursing major Emily Maybach and another friend this year. Janes was not able to move in this year, however.

“I met her one of the first days freshman year,” Maybach said. “She was such a nice person and really outgoing. You’d think she was the sweetest person ever, but she was so feisty too.”

Aside from CureSearch, Janes was also active in Epsilon Sigma Alpha service sorority with Brasen. The sorority dedicated its Nov. 15 fall fundraiser to Janes.

“It was awesome; there were so many people there,” Brasen said. “We did a memorial for her at the beginning, the day after she passed. It was rough, but we were all there.”

Janes talked to The Scout in November 2011 after her first remission.

“Keep your head up and think positively,” she said. “That’s what got me through it. Don’t throw yourself a pity party, and keep thinking positively.”

“Throughout her entire battle, she had a smile on her face,” Brasen said. “She was very optimistic. Never once did she say ‘I can’t do this; I don’t want to do this’.”