Bradley students work behind the scenes at Olympic internships 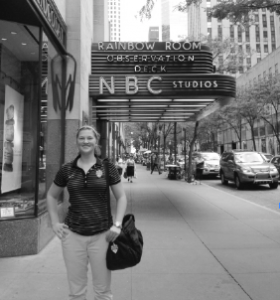 The most watched event in United States television history, the London 2012 Olympics, was brought to you in part by Bradley students.

10 students interned for NBC this summer, the broadcasting network covering the games, where they performed a variety of tasks in both London and NBC’s home of 30 Rockefeller in New York City.

Paul Gullifor, chairperson for the Department of Communications, said he has been trying to incorporate global experience into the sports communication major since its 2009 founding.

“[The students received the internship through] persistence,” he said. “I continued to tell NBC the Bradley story.”

Emails were sent out more than a year ago to nearly all communications majors about the NBC internship, and the potential interns were interviewed and selected by April 2011. Senior public relations major Montel Hardy said Bradley’s preparations helped him nail the interview.

“Thanks to advice from Bradley’s Communications department, I came in prepared for nearly anything [NBC] could throw at me,” he said. “I would say that NBC looked more for personality, so they wanted to see what each student really was instead of what they were trained to be.”

The students stayed in London and New York for three to four weeks, and took on one of three positions: runners (who ran basic errands), production assistants (who assisted the producers for certain events) and loggers.

Senior electronic media major Elise Andert was a logger in New York City. She watched two to four events a day and logged all the important calls, penalties and points, making it easier for future highlight reels to be constructed.

Kevin McClelland, who interned as a graduate student, was also a NYC logger. He stayed in New York University resident halls with the other Bradley students during the internship.

“[The internship] gave me a deeper glimpse of the world of TV production and let me see all different aspects about what it takes to be on TV,” he said. “It reaffirmed what I want to do in sports.”

Gullifor said the collaboration between multiple units on campus helped secure the limited amounts of internships for students.

“It means a lot for Bradley,” he said. “Bradley’s mission is to create an institution of national recognition, and we were only one of five universities that NBC picked for the internship.”

Andert said the opportunity to intern for NBC was unbelievable.

“NBC is my favorite network so it was amazing to work with them,” she said. “I would have taken out their trash if they wanted me to.”

As for future Olympic Games, Gullifor said Bradley has a great chance to work with NBC again.

“I just spoke to NBC and they gushed in praise for our students,” he said. “They do want Bradley students at the next Winter Olympics. They said ‘when we need interns, you’ll be the first we’ll call.’ After I hung up the phone, I just screamed.”

Gullifor said the Peoria community watched the games in a new way this summer.

“I watched it in a whole new way too, knowing 10 of my students were helping bringing it to my living room,” he said.