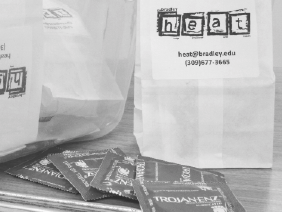 Last year Bradley University piloted its very own condom distribution program where students were given access to free condoms. Students can simply walk down to the office in their residence hall or the Wellness Center and take a pack of condoms for protected sex at no charge.

As the program continues to grow, one change has been made: there are now five condoms in a bag instead of 10. According to the Coordinator of the Alcohol and Awareness Program Lyndsey Hawkins, the program distributed 22,000 condoms last year.

“We assume that some people took a condom bag and did not use all of the condoms or just have them on hand in case they need them in the future, so we are hoping that by reducing it to five condoms per bag we will eliminate waste,” Hawkins said.

According to research studies, having condoms readily available for students is a good idea.

“Better accessibility to condoms leads to increased usage, not sexual activity,” Hawkins said. “We believe it is the responsible thing to do.”

Hawkins said the program’s goal is to encourage students to use protection during sexual activity, rather than to encourage intercourse.

“Students are going to have sex whether the school gives them condoms or not, so why not just encourage protected sex,” freshman nursing major Becky Mullin said. “It’s convenient.”

So far the program hasn’t had any problems, but a few changes have been recommended by students.

“It’s a good but awkward program,” said junior resident advisor Cabrittany Price. “It would be nice if students could get condoms in a more private way so we don’t know their business.”

Price said it would be convenient if condoms were in the bathroom, but with that change students risk using a condom that was tampered with.

“Overall it is a good program and the change of the number of condoms in a package will save money,” she said.