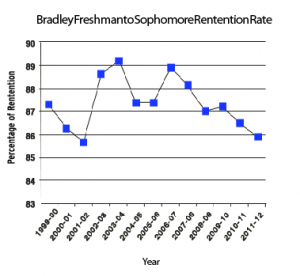 Bradley’s freshman to sophomore year retention rate has gradually decreased 3 percent over the last six years. However it still remains competitive with the national average for private, selective universities like Bradley.

“There has been a decrease since 2006 and a lot of that is tied up with the economy and other personal factors,” said Vice President of Student Affairs Alan Galsky. “You could be talking about a situation where a student leaves the university because of the cost and finances.”

A total of 144 students of the 1,018 fall 2011 freshman class decided to leave Bradley. Of the 144 students, 74 students transferred, 25 students were dismissed and 45 students left for unknown reasons or personal/medical reasons.

“We are proud that year in and year out the retention rate is only plus/minus five percent difference from the national university average,” Galsky said. “Generally that shows overall satisfaction. There is no better macro indicator that your students are having a good experience than the freshman to sophomore retention rate.”

Even though the retention rate is still strong from a comparative standpoint, Galsky said there is still room for improvement.

“Any time you’re five to six percent above the national average it is a good thing, but we would like to get back to 87-88 percent,” he said. “We continue to refine our programs whether it’s tutoring or our Turning Point Retention Program.”

Moving forward, Galsky said although the 2012 fall freshman class size was smaller than projected goals, there may be a higher retention rate for 2012-2013.

“This current freshman class is better academically than last year’s,” he said. “In context, there is a lot of data that supports that the better the students, the more likely they are to stay at their original choice. This could be a good indication that we could have a better retention rate next year, but right now it is still just a theory.”