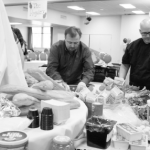 A new event on campus recently brought a food fight to campus, but not in the traditional sense of the phrase.

The event, Brave Chef, was hosted by new hospitality and leadership club Fresh Slice. The competition pitted four teams of six students against one another in a cooking competition, similar to the Food Network show “Iron Chef.”

More than 60 students, faculty and staff and community members attended the event on April 5 in the Student Center Ballroom.  Aramark catered fruit, desserts, drinks and other snacks to the attendees, while Fresh Slice members gave away prizes.

“[Brave Chef is] something fresh that Bradley has not seen yet,” said Fresh Slice president and senior hospitality leadership major Dana Robinson. “It allowed students to compete in a live cooking competition, which was also was an exciting event for the audience to watch.”

The dishes were scored on four catergories: serving methods and presentation, portion size and nutritional balance, creativity and practicality, as well as flavor, taste, texture and completeness. Participants also had to use a secret ingredient in the final dish: pineapple.

“This is the first time we have ever created, planned and orchestrated a broad-spectrum event like Brave Chef,” Koci said. “I am pleased with how excited the competing teams were to be involved, and we were very impressed with the audience turnout.”

“Dana is one of the Epsilon Sigma Alpha members, so we made a team to support her,” Pine said. “I think the event went very well for the first year, and a lot of hard work was put in, which definitely showed. I think everyone who came out had a great time.”

“We received a lot of great donations, and hope to make Brave Chef an annual event,” Robinson said. “The more our major grows, the more hands we will have to help make events like this successful.”