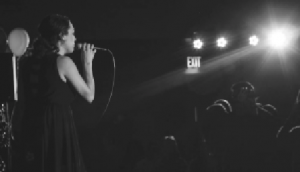 Balloons and paper hearts hung from the ceiling of the Student Center Ballroom. Swing music of a bygone era played softly in the background. Tables had candles, rose petals and disposable cameras.

Bradley students filled the ballroom for the second annual Sounds of Love concert, put on by Brave Sounds Entertainment on Valentine’s Day. The concert included sketches from the improvisational group BBQ Kitten, music from L.A. artist Racquel Rodriguez and contests.

“We’ve spent so much time working on the show,” Bradley said. “It takes months of planning and dozens of people to prepare for an event amounting to just a few hours’ worth of quality entertainment, but we love to do it.”

Improvisational group BBQ Kitten began the night with sketches. The group took suggestions from the crowd for scenes and included three audience members in a skit.

“Working with BBQ Kitten has culminated in the ideal ratio of professionalism and silliness – a must for their profession and a perk for anyone who has the opportunity to work with them,” Bradley said.

Chairs were cleared for students to dance during the performance. Members of Bradley’s Swingers, a swing dance club, showed off their moves. Bradley Swingers’ Executive Board Member Jordan Walter found the music suited their style of dance.

“This kind of music we always look forward to,” Walter said.

Throughout the concert, students voted for Most Eligible Bachelor and Bachelorette, Best Bromance and Best Couple. Winners were announced at the end of the night and recieved gift cards from local Peoria businesses.

Brave Sounds already has plans for more upcoming concerts over the semester. Bradley said he plans on events for “everyone” with a “wide variety of genre” including punk rock, hip hop and rock n’ roll.

“We are lucky to have some of the most amazing and talented students working with us on these projects, and that makes the process a joy for everyone involved,” Bradley said.