BU greek members give back to Peoria community 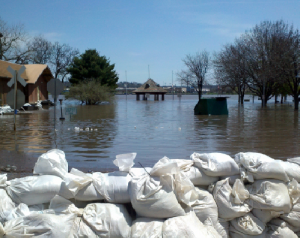 This weekend, several greek members had the opportunity to get their hands dirty to prepare for the Illinois River flooding.

More than 100 students gathered on Saturday morning to participate in “Greeks Give Back,” a program where Bradley greek members volunteered in various service activities throughout the greater Peoria area.

The greek house with the largest attendance, Gamma Phi Beta sorority, was awarded $100 and a complimentary breakfast.

“I went because I wanted to experience community service with all the greeks on campus,” said sophomore psychology and social work major and Kappa Delta member Stephanie Shyken. “I felt that we have such a negative view as greeks, and I wanted to show campus and the community that we do good things.”

Participants volunteered at several locations in Peoria. Shyken and 30 other greek members were stationed on the riverfront where they helped stack sandbags to protect houses from the river flooding.

“I helped make sandbags for the house of a woman that had just moved in one month prior,” she said. “Some houses had already been flooded, and we were just trying to prevent the rest of them from flooding as well.”

Another student said he volunteered closer to Bradley’s campus.

“I was behind the AutoZone on Western Avenue,” said sophomore education major and Delta Upsilon Tracy Davis. “At our site, we picked up trash around the neighborhood and in the alleyways.”

Davis said he chose to participate in the program because he knew that the greek community can make an impact.

In addition, greek members visited the National Association of the Advancement of Colored People office, the backyard of a citizen on the 1700 block of Argo to help him clean and organize, War Memorial Drive, University Street fast food places, Glen Oak School neighborhood and several other locations around Bradley’s campus.

Russell Howland and Caroline Reardon, the directors of Philanthropy and Service for the Interfraternity Council (IFC) and Panhellenic Council (Panhel), respectively, coordinated the event.

Howland said all of the Panhellenic chapters were represented, along with Pi Kappa Phi, Delta Upsilon, Pi Gamma Delta and Pi Kappa Alpha.

“We chose the date about two months ago and worked with ‘Keep Peoria Beautiful’ to identify sites,” he said. “Most of the sites involved picking up trash.”

IFC and Panhel hope to collaborate again next year to plan an even better year of volunteering for the greek community, Howland said.

“I would do this again,” Shyken said. “I was able to meet new people, and we all went out to lunch after the event. It was such a great opportunity to have the greek community come together and meet new people while helping the area.”