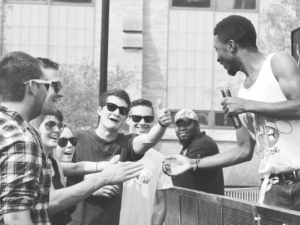 A new group on campus called +music has already had success co-sponsoring its first event, The Borderline Music Festival.

+music member sophomore Christian Lyon said that the organization’s goal is to bring free live music to campus, stemming from many different genres, to students who would otherwise not have the opportunity. The group as a whole looks forward to hosting more of these free events.

It was hard work to get +music off the ground. As a concept originally put together by +music President Ryan Gould and Lyon, the organization went through variations in the early stages.

“It’s difficult to pinpoint its conception,” said Gould. “The whole idea of +music was nearly dropped, but when pitched to ACBU [we decided] it was a good time to start the group because we could gain recognition.”

In its early stages, most of the +music members were part of an additional campus organization, Brave Sounds. Although +music was filled with members who were “super ambitious,” the original idea needed more time to develop. Despite this, Gould said they owe a lot of their success to the original group. After some time, the organization reemerged lead by Bradley, Gould and Lyon.

Bradley said he became involved with the organization over a musical discussion with Gould.

“I spoke with him casually about my interest in having Kids These Days perform at Bradley, and together we decided that my head was in the right place to join what would soon become +music,” Bradley said. “My goal was reached, and greatly surpassed through the Borderline Music Festival.”

Working with other campus groups at a new venue and attracting many students suggests a theme: +music wants to do more than provide music to Bradley.

“That’s the reason we chose this name,” said Gould. “It’s supposed to be ‘something’ plus music.”

+music is looking for people who are truly inspired by music. Members do not have to be music majors to join. In fact, a few of the members are English majors.

“As of right now we are an embarrassingly small organization with incredible drive and determination,” said Bradley. “We’re looking for people with passion, crazy ideas and a work ethic to make those crazy ideas happen. You need to be really, unusually inspired to become involved with us.”

+music is still deciding on its next move.

“We are in the process of truly deciding what all of our goals are,” said Bradley. “Since [BAMF] we’ve begun brainstorming about new ideas.”

Bradley said he wants +music to become a rewarding experience to members and the Bradley community as a whole.

“Let’s make Bradley’s music scene unforgettable,” he said. “It’s up to us to make these four years as fun and rewarding as possible. Apart from +music, check out Brave Sounds and ACBU for more great ways to get involved.”