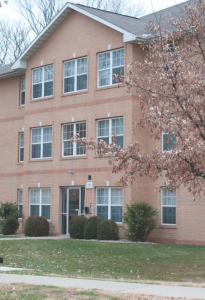 In just the span of time that school has been in session, four students have been the victims of armed robbery.

Three of those students were targeted on Monday alone. Some students said that reality is leaving them unsettled when traveling on campus or to their homes.

Senior international business major Alyssa Fara lives in St. James near where the first robbery Monday night took place. She said she does not feel safe in her apartment building.

“It would have been nice to be informed personally [by the police] of what was going on,” she said. “We had no idea what was going on. We weren’t checked up on enough. But at least we got a [foreWarn] text this time.”

“The text message made feel safe, because I was at St. James when the robbery happened,” she said. “It was nice to get a quick response.”

Caulley said she was particularly surprised the robbery occurred in St. James.

In response to the robberies, Bradley University Chief of Police Brian Joschko said officers have been patrolling more aggressively on and off-campus.

“There was an increase in police presence, a substantial increase in and around St. James and the Arbor District,” he said. “We always did have a significant presence in that area, but we instituted a general increase of foot and bike patrol.”

Joschko said for the robbery in St. James, a ForeWarn text message was sent due to the nature and location of the situation.

“The officer on-scene, based on training and experience, thought it was a threat to campus and authorized for a text to go out,” he said. “Once we thoroughly searched the area and determined the person wasn’t here, we provided a safety alert. We thought it was important to send out a description of the suspect and updates on the situation.”

Shortly after that incident, an attempted armed robbery took place at the intersection of Bradley Avenue and Cooper Street. Joschko said officers went after the suspect on foot, but were not able to catch him.

“We issued a safety alert and also searched Laura Bradley Park for the suspect; we wanted to confirm the suspect had left the area,” he said.

By the time the second robbery was attempted, Joschko said there were double the amount of officers at hand.

“After the first robbery, all the second shift officers were extended to third shift, so we had twice as many officers at that point,” he said.

Joschko said he was impressed with the actions of the police that night.

“I think our response to both incidents was incredible,” he said. “For both Peoria and Bradley police to set up a perimeter was extraordinary. We did everything correctly, yet the suspect got away, so that was disappointing.”

The BUPD officers were upset by the robberies, especially happening so close together, Joschko said.

“It was alarming, it was concerning and all of the officers took the events very personally,” he said.

Lt. Elizabeth Doyle has been with the Peoria Police Department for 30 years. She said despite the crime, Bradley is a usually safe campus. However, there are safety tips to keep in mind all the time, she said.

“It’s important to travel in pairs and be aware,” she said. “Follow your gut instincts. If you see someone and you don’t feel right, turn around and go the other way. If you don’t feel safe getting somewhere, call the police for an escort.”

Carrying certain protective items can be useful, but students have to use judgment, she said.

“You can certainly carry mace or a whistle with you, but its use depends on the situation,” she said. “In the case of an armed robbery you should be cooperative. Property and money can be replaced, but you can’t. [The robbers] are stressed too, and if they panic, they could pull that trigger.”

President of the Moss-Bradley Neighborhood Association, which encompasses many off-campus streets where students live, Rob Lorenz said the community is also concerned about the recent crimes.

“We think [these events] are terrible, and they’re of great concern to people in the area,” he said. “I think the occurrences of armed robberies have increased in the past two years, but until recently they hadn’t been a problem.”

As a measure of safety, Lorenz said he would be open to discussing lighting additions in the Moss-Bradley neighborhood.

Lorenz said he thinks it is important to work collaboratively and discuss ideas.

“We’re concerned about students, too,” he said. “A lot of us are parents, and we’d feel terrible if anything really bad happened. So if anyone has proposals, we’d be happy to be at the table.”