CEO and co-founder of Priceline.com encourages students to dream big 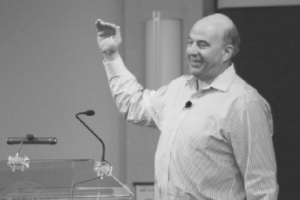 Although Alumni Hall in the Alumni Center was set to seat 250 students and professors on Monday, there were more than 100 extra patrons who lined the walls to hear an entrepreneurial speaker that some said they would never forget.

Jeff Hoffman, co-founder and CEO of the Priceline.com family of companies, helped create a number of successful start-up companies, including uBid.com and RedTag.com, and he now travels the world as a motivational speaker.

Hoffman was the inaugural speaker of Bradley’s Distinguished Entrepreneur Speaker Series, hosted by the Collegiate Entrepreneur’s Organization and paid for by all of the university’s colleges.

As a large supporter of “finding a passion in the world,” Hoffman said his motivations are traveling and motivating other people.

“I used to launch companies,” Hoffman said. “When people ask me what I do now, I say I launch entrepreneurs.”

Having worked in corporate America, electronic travel planning, movie and music production, writing and working with the White House and the U.S. Department of State, Hoffman said he had a plethora of experiences to share with Bradley, including a few surprises.

“My favorite part was probably his picture with N*Sync,” said sophomore electrical engineering major Bailey Roehrig. “[He proved] if you set your mind to something, you can achieve it.”

Hoffman said he always had big dreams, like meeting celebrities and creating something of value in the world, and he said he never let anyone deter him from achieving them.

“[When I was a kid], everyone laughed and said, ‘your dreams are too big,’” he said. “I kind of stopped telling people my dreams after that, but I never stopped having them.”

This, Hoffman said, was part of the three motivational statements he thought of in high school and still has hanging in his office today. They say “Dream Big. Work Hard. Create Value.”

“Your attitude determines your outcome,” Hoffman said. “If you fundamentally believe in what you’re doing, that’s what will enable you to succeed, not whether everyone believes that you can do it.”

While Hoffman’s peers attribute his success to luck, he said only luck isn’t enough.

“People say, ‘Oh Jeff’s just lucky,’” he said. “But luck is the elevator. You’re in there, and you’re standing next to someone who can change your life. But luck just puts you in the elevator. The rest is up to you. You have to be prepared.”

Lester Johnson, a freshman pre-business major, said he was inspired by Hoffman’s “Get off the couch!” mantra, which revolved around the idea that talking about an idea isn’t the same as implementing it.

“The message about getting out and doing something, even though you’re afraid, really hit a core with me,” he said.

Ryan Miller, junior engineering major and president of the Collegiate Entrepreneur’s Organization, said although it was his third time watching Hoffman speak, he never gets old.

“[Hoffman] always gets me fired up, especially [in regards to] creating some new ideas,” Miller said. “All too often you get caught up in work, but it’s important to add new ideas.”

Miller said the organization plans to host at least two more speakers in the coming semester, which most business students will be able to attend for extra credit. However, some students might leave the speaker with more than they bargained for.

“It was amazing,” said freshman entrepreneur major Brian O’Donell. “[I] came here for the extra credit, [and now I’m leaving] with some great life advice.”

At the end of the lecture nearly 60 students and professors lined up to greet, take pictures and discuss ideas with Hoffman. Many of the sentiments he said then echoed the opening remarks he made lauding Bradley and its support for entrepreneurs.

“I heard about the [Turner School for Entrepreneurship and Innovation] and the way that Bradley is approaching entrepreneurship,” Hoffman said. “[Bradley gave] it everything from the investment to the respect to the independence to the facilities that it needs to make entrepreneurship happen, and that’s why I made a commitment to speak here today.”