Challenge on 74 could save 849 lives with donated blood 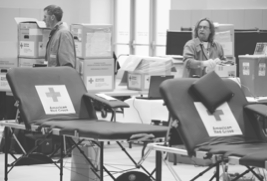 “The Challenge on 74 is focused around the basketball rivalry between Bradley University and Illinois State University,” said Donor Recruitment Representative for the American Red Cross Sarah Johnson. “These two universities take up the challenge to collabora- tively collect 350 plus blood donations within a three day timeframe. There is no money involved. [It is] solely a challenge to bring in the most blood donations.”

Both universities had a goal to collect 175 total units each at the end of the competition. Bradley was just 15 units shy of that goal after the three days, but beat ISU, which collected 123 total units.

It was Bradley’s first win in the annual blood drive, and many of the volunteers were pleased that Bradley could beat the larger university.

“Even with roughly a third less students, Bradley collected more blood units than ISU,” said junior dietetics major Clint Boone, who is also the Bradley’s American Red Cross Club President. “It truly shows that this campus is filled with amazing and generous people.”

“We did really well this year,” she said. “I am proud to say that we beat ISU.”

Despite the large numbers of blood units the universities collected, the turnout at the drive was smaller than previous years.

“This year, our results were short of what we had hoped for,” Johnson said. “Last year,

Johnson said even though there were fewer donations, the drive still made an impact.

“With the winter season, cold/ flu symptoms and low invento- ry, every blood product counts, and we are grateful for the work the students put towards the Challenge on 74,” she said. “We hope for even better results next year.”

Competition aside, both Bradley and ISU played a role in saving lives with their donations, and the Red Cross is thankful for it.

“The American Red Cross would like to thank the blood drive coordinators and donors for taking time out of their busy schedules to insure that we have an adequate blood supply to meet the needs of the patients we serve,” Johnson said. With both universities’ collections, potentially 849 lives will be saved with the donated blood.