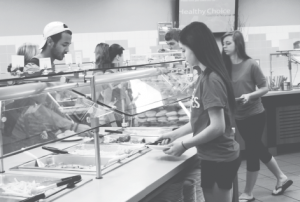 Sustainable programs initiated last year in the dining halls are set to continue, albeit with some changes.

Vice President for Business Affairs Gary Anna said initiatives like the reusable clamshell containers and composting are still in place, at least in some dining areas.

“They’re maintaining clamshells in residence halls, and we will continue to compost, though there have been some hiccups there,” he said. “But that’s up to speed now.”

Anna said clamshells are limited to certain areas, at least for now.

“The shops in the [Michel] Student Center are more retail now, so it’s difficult to implement clamshells there, since a lot of the food is already packaged,” he said. “But we will give anyone their clamshell deposit back.”

But some areas in the Student Center are undergoing earth-friendly assessments, Anna said.

“There has been some discussion about cups,” he said. “We are looking at materials that are more recyclable. In the Student Center right now, those cups are standard stock.”

General Manager for Food Services Matt Wilton said there are new programs to come, but they are in their testing phases.

Wilton said as they search for the most sustainable cup for the Student Center, students may notice a mismatched supply.

“We are trying out a variety of compostable cups, and trying to hone in on one we like,” he said. “So we are still evaluating what’s going to go in.”

Some of the food that’s served has sustainable aspects, too, Wilton said.

“One-hundred percent of our fryer oil is recycled, and the pizza sauce at Topio’s is organic, which I don’t think a lot of people are aware of,” he said.

As for stocking the dining spots with locally-grown produce, Wilton said that is a process in the works.

“We need to go through a distributor for safety purposes, so they can inspect the food and distribute it to us,” he said. “So yes, we want to bring in local produce, but there are more steps before we can implement that.”

There is also a new plan to salvage leftover food, Wilton said.

“All of our excess food that’s already cooked goes to the Heart of Illinois, if it’s usable,” he said. “They distribute it to places like soup kitchens in the area.”

That relationship is new, Wilton said, but it is something they would like to continue.

“When we have catering events, for example, that food is already cooked up,” he said. “ We got that lead from a staff member on campus.”

Anna said he and the Sustainability Committee, which is a group of about seven students, will continue to meet and discuss green possibilities for the dining areas.

“Food is a big issue for us,” he said. “It’s fair to say, with the commitments we have made, that we won’t be stepping back.”