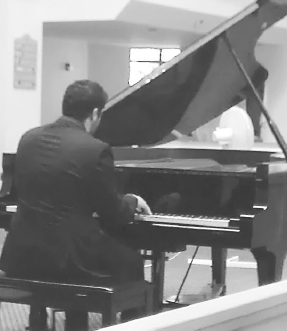 Three students made a difference with their piano playing this weekend,

Three students took to tickling the ivories this weekend with philanthropy on their minds.

“The fact that people were willing to donate to charity made [the concert] even better,” said Kalhorn. “It’s always nice to be able to play for a cause that’s above yourself.”

The students performed a variety of classical and modern music for a crowd of over 100 students, faculty, friends and community members at.St. Thomas Catholic Church in Peoria Heights.

“You got to see the humanitarian side of Jameil, Ashton, and James,” said senior biology and religious studies major Azeem Rehman. “It’s an important part of seeing that science majors aren’t all about just science; they can do other things too related to the arts.”

Abou-Hanna, who coordinated the event, said he was inspired to organize the event for charity by his piano professor.

“I got the idea because Dr. Russell did a fundraiser concert in Haiti to raise money for a Hatian music school,” he said. “I thought that was a really neat idea and I wanted to do something like that.”

“I realized that the four years of rest really built up a lot of drive to play piano again,” said Kalhorn. “I’ve loved playing it ever since.”

While both Abou-Hanna and Kalhorn have been playing piano for a long time, Sapp began playing when he started college.

Abou-Hanna said through the piano concert, he learned how hard work can pay off.

“I think that’s one of the most important things you can do in life, to work hard and put all the effort you can towards something… whatever you’re involved in,” he said.