Co-ed housing not likely for St. James next year 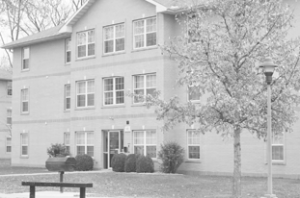 St. James Apartment roommates Shelby Spierling and Ashley Kowalczyk were surprised when they were not allowed to add a male roommate this semester despite there being nothing in writing against it in their current lease.

“Ashley told me she wanted our friend to live with us,” Spierling, a junior biology major, said. “She said she asked Cambridge [Property Management Inc.], and they said without a marriage certificate men and women can’t live together. I thought it seemed unfair, so I wanted to find it in the lease. I scoured [it] and couldn’t find anything about co-habitation.”

Spierling said the lease stated the lessor must do business in accordance with the Fair Housing Law, meaning lessors cannot discriminate against lessees in regard to sex, race and marital status.

“I looked further into the marital status clause and found that a lessor is not allowed to ask for a marriage certificate,” she said. “I was in shock and went to talk to Cambridge. I asked if I could have a male live with me, [and] they said no. They told me it was a Bradley policy, so I went to the Bradley housing department.”

Managing Broker at Cambridge Jason Kesler said the complex must follow Bradley policy, as it sits on university property.

The policy is Business Manager Ken Goldin’s, and he said he has no intention of changing it.

“St. James reports to me and has since the day it was built,” he said. “We didn’t have that in the dorms, so it seemed right to me to have it that way in St. James. Whether in print or not, that’s the policy.”

Goldin is retiring at the end of the school year so there’s a chance the policy could change when he leaves, he said.

“Everything changes,” he said. “I never thought we’d distribute condoms on campus either, but that changed. I retire in May, so I’m not going to change it while I’m here, but I don’t know what’ll happen when I leave.”

Regardless of what’s to come, Executive Director of Residential Living and Leadership Thomas said he supports keeping the policy in place.

“There’s a lot of value in the residential experience,” he said. “Mixing genders throughout a dorm floor is fine, but in apartments it opens up issues that we don’t want to get involved with.”

However, Thomas said the policy should be in writing.

“It is my intention to move through the appropriate channels to have the regulations for campus housing laid out in the Student Handbook,” he said. “Most particularly, the inability of different-gendered students to share the same room/apartment has been a long standing policy of the university. It should be clearly reflected in the Student Handbook.”

“Because St. James is an extension of Bradley, there are two main rules I wanted: No kegs and no co-ed living,” he said. “We had a Student Senate resolution that since Main Street Commons was a private entity, we should not dictate those rules to them.”

By not allowing co-ed living, Galsky said, the university is trying to avoid serious instances where a roommate would want to move out.

“The literature shows there is no real negative issue with co-ed living, it’s just that the possibility always exists for a relationship to sour,” he said. “Nasty breakups, sexual assault, unwanted pregnancy–those kinds of issues outweigh any benefits, particularly in a building we own.”

As far as gay and lesbian students living together, Galsky said those situations are not easy to monitor.

“It’s a fair question, but we don’t assume that it’s the case in housing,” he said. “It’s hard to determine in a micro sense.”

Though stating in a Nov. 2010 article titled “Administration holding off on co-ed living in St. James” that the university would see how co-ed living went at Main Street Commons and then “allow it and start it at St. James in 2012,” Galsky said he has changed his mind.

“That will probably certainly not happen for next year,” he said. “The more I’ve thought about it, because it is a building we own, we should be consistent. And they have that option near campus with Main Street Commons.”