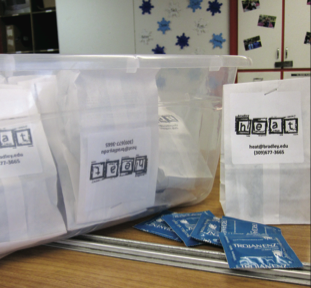 Two weeks have gone by since the condom distribution program began in residence hall offices, and program administrators said they have received nothing but positive feedback.

“The distribution has gone smoothly,” said Executive Director of Residential life and Leadership Nathan Thomas. “Everyone seems respectful of the program. There have only been a few minor things, but no blatant problems. Overall I think it has been fairly successful.”

For the first time on campus, condoms are available to students in dorms or the Wellness Center free of charge. During office hours, students are able to pick-up one package of 10 Trojan brand con- doms without having to sign-up or provide a student ID.

Coordinator of the Alcohol Education and Awareness Program at the Wellness Center Lyndsey Hawkins said each dorm received 150 packets of condoms and only one dorm, Williams Hall, has needed more.

“I’m glad that things seem to be going well and in an organized way,” she said. “But overall I’m glad that the students are being mature and responsible.”

Hawkins said the Wellness Center ordered 9,000 condoms at the beginning of the semester and the center recently ordered an additional 7,000 condoms to keep on hand.

“I think the program is great,” said senior Claire Vogel, a Resident Advisor in Wyckoff. “Not only does it provide free condoms to students, but it also brings sexual health into the light a little bit more. I hope that having condoms in the office makes sex a little less taboo and opens up a discussion on Bradley’s campus about safe sex practices.”

Condoms are only available during a residential hall’s office hours, as opposed to leaving a bowl of condoms out in the open, to ensure that condoms will not be tampered with.

“Knock on wood, we haven’t had any problems yet in our building,” said the Residence Director of University Hall Nick Stocchero. “I think it goes to show that if you treat your student body as adults, then they will act as adults. I do have faith that our student body has the maturity to act responsibly.”

Because the distribution of the condom packets will be managed in part by Residential Living staff, Thomas said they have been care- ful to respect the beliefs of staff members.

“Clearly the condom is a political issue, a religious issue and a controversial issue,” said Thomas. “We have been conscious of that and have respected those differences.”

Hawkins said the way the program works is that condoms will be available on the counter of the office within the glass doors, so students would just have reach in and grab a packet, allowing mini- mal contact and handling of the condoms by ARAs and RAs.

“The program was designed so that the RAs and ARAs can remain extremely separated from the distribution; in fact they are not endors- ing the program at all,” said Stocchero. “The only time the RAs and ARAs become involved with the process is to refill the small container placed in the window. As Hall Directors, we will work with staff members who have personal objections to the program on a case-by-case basis.”

The program was originally proposed by Bradley University Student Senate Officers in October as a way to make condoms more accessible to students on campus. By December, the President’s Cabinet voted to support and implement the Senate’s resolution this semester.

“So far we have been very happy with the program, but I would still like to see it expand,” said Student Body President Tricia Anklan. “I would like it to be in a more convenient place for students because the residential hall offices are not always open.”

Although the program has received positive feedback from students, Hawkins said its popularity may eventually wear away.

“We are anticipating that the novelty of the condoms is what is making them go fast,” she said.

“But in a couple years, it will be in the culture of Bradley and it won’t be as big as a deal anymore. Just like how when Markin opened students went to the building just toseeitandtryitout,butnowwe don’t see that many people there who aren’t there to workout.”

At the end of the semester, Vice President of Student Affairs Alan Galsky said the program will be evaluated to see if changes need to be made.

“There are several areas we will review at the end of the year,” Galsky said. “Is the program working and working effectively? If not then how do we make it better? So in case there are some areas that are not working as well, an evaluation can improve them.”