Date rape drugs in bars a concern, but also preventable 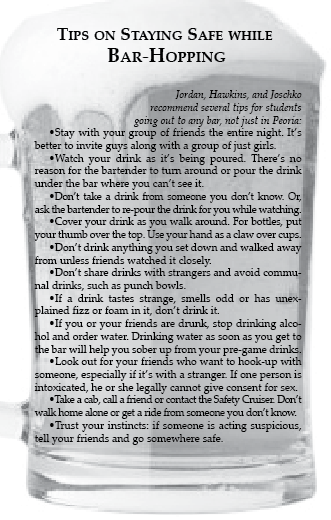 As students celebrate the new school year by taking trips to Peoria’s many bars, they should be wary of something in particular – their drinks.

“It’s not to say it’s been dangerous [in Peoria bars], but there have been issues in the past couple of years,” Jordan said.

Jordan’s jurisdiction covers the bars found in downtown Peoria, not those on Farmington Road.

“Downtown bars aren’t just Bradley bars,” he said. “It’s a mix of everybody, a mix of ages, groups, locals, Bradley students and out-of-towners. [The bars don’t provide] the comfort level of [only] Bradley students.”

Although there have been no confirmed cases of date rape drugs reported to the Bradley University Police Department since his arrival in 2011, BUPD Chief of Police Brian Joschko said date rape drugs are still a department concern.

“We take the safety of our students and our entire campus very seriously,” he said. “It is imperative that our students know about and understand how to deal with date rape drugs.”

After consuming a date rape drug, many victims suffer memory loss. Interim Director of Wellness Lyndsey Hawkins said the crime is often not reported because of this.

“Historically, sexual assaults are underrepresented as is,” she said. “Most people don’t know what’s happening in the moment or after [they’ve taken the drug], and don’t realize what happened in the morning.”

“If you don’t report it, that person can go out and do it again to someone else,” she said. “Cover your own bases and help your friends out. It’s not your fault. Reporting an assault will end that cycle.”

The Peoria Police Department is aware of these dangers, Jordan said, and more police will patrol downtown bars on Fridays and Saturdays.

Jordan said students should not be discouraged from going to downtown bars, but to be cautious and know the risks.

“It’s been tough, but Peoria is no different than any other urban place,” he said. “Be aware of what’s going on. Not all bars are full of crooks, but it only takes one.”