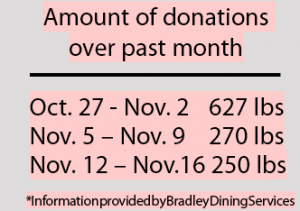 In the spirit of giving, Bradley Dining Services will make a large donation to the Peoria community this year. For the first time, dining services is donating leftover food from catering events and dining halls to the local food bank, Heart of Illinois Harvest.

“I think [donating food] is a good idea,” said senior family and consumer sciences major Ashley Tobias. “ Because if we are not going to use it it’s better to give it to someone who can rather than throw it away.”

Senior nursing major Tiffany Williams said she agreed that donating is a resourceful way to give back to the community.

“I think it’s a great idea,” she said. “It’s better than throwing it away because there are a lot of people in need.”

To date, dining services has recorded that a total of 1,147 pounds of food have been donated this semester.

Marketing Coordinator for Dining Services Nicole Glukert said she has worked close with the Heart of Illinois Harvest to find out what foods can be donated and to establish a pick-up system.

“We get the comment that [students] watch employees throw away the last two pieces of a pizza at Topinos,” Glukert said. “But they didn’t see the five pans of food that got picked up for donations earlier that day.”

She said there is now a weekly pick-up schedule to donate. The Heart of Illinois Harvest picks up donations directly from Williams Hall, Lydia’s Lounge, Geisert Hall and the Student Center on Tuesdays, Thursdays and Fridays each week.

As opposed to a weekly schedule, catering services schedule donation pick-ups on a need basis.

“The process is running smoothly,” Glukert said. “Our teams in each location are used to gathering food and know when to expect the pick-ups.”

Glukert said now that they have a regular donation schedule, they would like to keep track of how much is donated each week in order to measure how much they are contributing to the community, as well as to ensure that food is not being over produced.

In addition to being resourceful by donating unconsumed food, Glukert said dining services is focusing on improving other sustainability efforts on campus.

“We will eventually decrease the amount of food we are producing in order to minimize waste and to be more sustainable,” she said.

Like the former dining services company, Aramark has continued composting in both dining halls, and clamshells are still available. In addition, dining services sells a plastic Coca-Cola cup that can be reused on campus.

“I like how you can reuse your cup,” said senior accounting major Lindsay Spencer. “It’s a good idea and will save a lot of money and paper in the long run.”

“I feel like they do enough [to be eco-friendly],” she said. “We’re a little campus and we can’t save the world; I don’t know what else they could do.”